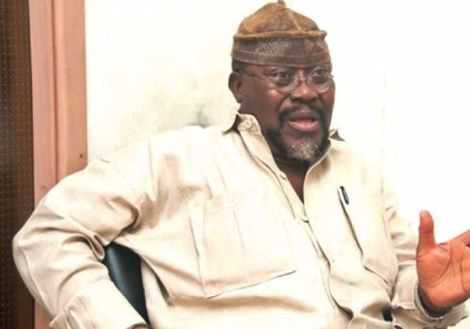 Founding member of the New Patriotic Party (NPP), Dr. Nyaho Nyaho-Tamakloe, has stated that Vice President, Dr. Mahamudu Bawumia, will not be able to secure the mandate of party delegates to become flagbearer for the 2024 general elections.

According to him, the structures within the party will militate against the reported interest of the Vice President to contest for flagbearer in the governing party.

Commenting on the Alan/Bawumia race in an interview on TV3, the statesman said even though he vouched for the Vice President to become a running mate to President Nana Akufo-Addo, he would have preferred if he was independent of him.

He explained that the Vice President has been a praise singer of the president during his political career.

“Bawumia…I did an interview. It was a foreign magazine. I will find out if I have a copy and I will show it to you where I made plain that by the structure of our party, Bawumia cannot come to power.

“Bawumia is a fine gentleman. If Bawumia could have had that independent mind and strength and not just always praising what the president has done or has not done, I will have looked at him differently.

“I know Bawumia very well. Indeed, I was one of his backbones when he was elected as [running mate] some years ago when Akufo-Addo told me that…in Akufo-Addo’s own house, he called me aside and said I should support Bawumia because people wanted him to change Bawumia.

“Myself, late Aliu Mahama we gave Bawumia the best protection. We went to his place in Bimbilla…all the way there…Mamprusi area…we traveled with them all over those places.

“Even Accra here until finally, I was with Akufo-Addo when we presented him as the running mate to Nana Addo to the leaders of the political party,” he told host Johnnie Hughes on Wednesday, June 22.

The NPP is yet to announce the presidential primary date.

The Vice President, Dr. Mahamudu Bawumia and Trade and Industry Minister Alan Kyerematen are reportedly lacing up their boots to slug it out.