As it has long been propagated in the minds of others, former Central Regional Chairman of the National Democratic Congress (NDC), Bernard Allotey  Jacobs, has affirmed that Dr Mahamudu Bawumia is indeed the “biggest problem” for the NDC.

Allotey Jacobs who went all out to campaigned for the NPP during the 2020 general elections, has in a post on Facebook mocked that the Vice President is a ‘political technologist’ who is giving his opponent sleepless nights.

Will talk about him later

2024 Again there will be no tears for Ananse”

Prior to this statement, Allotey Jacobs had begun recommending notable personalities within the NPP to be considered for appointment in President Akufo-Addo's second term.

Using the same Facebook platform, Educated Fisherman, is his affectionately called, boldly pointed that it was needful the President appoints Sammi Awuku to serve in his government.

According to him, the NPP National Organizer can “bridge between the party and government”.

"Genuine Advocacy Mr President you will need Sammi Awuku in your Cabinet to bridge between the Party and Government". His wrote on Thursday, January 14, 2021.

Meanwhile, the President has dissolved his Cabinet and appointed caretaker ministers who are aiding him in running the country's affairs. He relieved all his ministerial appointees on January 8, 2021, pending appointment of new ones. The action is in line with the Presidential Transition Act, Act 845 of 2012. 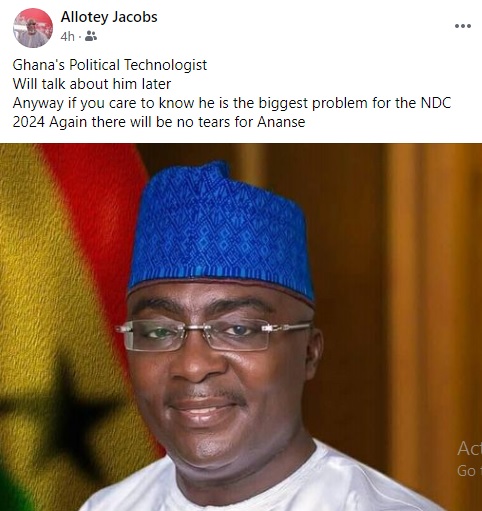