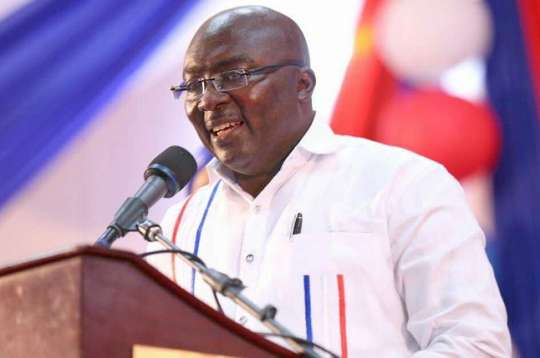 The NPP is expected sometime next year to organize a process to elect the next flagbearer to lead them into the 2024 General Elections.

In an interview on pro-NPP Asaase Radio, Ephson disclosed that Bawumia's chances are partly hinged to a recent meeting with former President John Agyekum Kufuor who made some nice comments about the veep - touting his loyalty to the NPP.

"I’m not saying he is not supporting Kyerematen but Kufuor’s comments virtually give an injection to Bawumia’s acceptability amongst elderly people who will follow President Kufuor and his choices. It is obviously a positive for Vice-President Bawumia.

“You need to bear it in mind that Kufuor could have refused to attend the function. There’ve been innuendos of Kufuor and Bawumia not being on good terms. So from what we’ve been picking up, I interpret this as more of a positive, a plus for Bawumia’s campaign,” he stated.

The former President's office on June 22 issued a statement that clarified that his comments about Bawumia was strictly apolitical and that there was no need for a spin to be put on it.

"The attention of the Office of Former President John Agyekum Kufuor has been drawn to erroneous reportage in some sections of the media, especially on social media, to the effect that President Kufuor has endorsed an aspiring candidate for the NPP flagbearership over several others who have expressed interest to contest in the race.

"The office wants to emphatically deny that any such endorsement took place on the said occasion and bemoan the fact that what transpired has been seriously misconstrued,” the statement signed by Dr. Kwabena Osei-Adubofour, a senior aide and spokesman read in part.

The NPP is expected to hold elections to elect a flagbearer to lead the party into the 2024 General Elections.

Between Agyapong, Kyerematen and Bawumia - only Agyapong has formally declared his intentions to contest. Former Energy Minister Boakye Agyarko is another candidate who has declared his ambitions.

Agric Minister Afriyie Osei Akoto and former Minister Joe Ghartey are all rumoured to be eyeing the slot. The winner will take over from President Akufo-Addo who is ineligible to contest after his second term ends in early 2025.