Be watchful; Samuel Jinapor is on a scheme to break the chieftaincy institution — Chiefs told 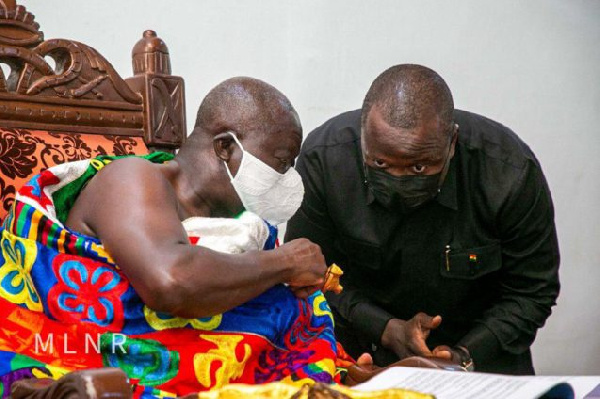 A strategy by Samuel Abu Jinapor, the Minister for Lands and Natural Resources, to destroy Ghana's chieftaincy institution has been uncovered by the host of Onua Maakye on Onua TV, Captain Smart.

In order to avoid future conflicts, the broadcaster has urged the chiefs to act with extreme alertness when dealing with politicians.

His remarks follow the controversy surrounding the country's fight against illegal small-scale mining (galamsey) and the Asantehene's recent comments on the matter.

During a recent interaction with a delegation from the US Embassy to Ghana at the Manhyia Palace, Otumfuo blamed the political leadership for their failed policies in the fight against galamsey.

However, in contrast with Otumfuo's remarks, the Minister for Lands and Natural Resources believe that the traditional authorities have a part to play in the fight against galamsey.

Speaking at the 40th Anniversary celebration of the faculty of renewable natural resources at the Kwame Nkrumah University of Science and Technology, Samuel Jinapor stressed that the Chiefs should partly accept the blame since government has put in much efforts in the galamsey fight.

“I come from a palace and I can say without a shred of equivocation that in most cases, no one, and I repeat, no one can bring a chain saw to harvest in the forest or an excavator to mine in the bush or chanfang to work on a river body in a community without the knowledge, acquiescence or passive approval somehow of the Chief, elders, the assemblymen, opinion leaders and or local authorities in the community,” he said.

But, after analyzing the situation on his platform on Monday, Captain Smart came to the conclusion that the sector minister had lost sight of the truth and was merely attempting to silence the traditional setting, much like politicians had previously done to organizations like the Christian Council of Ghana, the National Peace Council, and the security agencies.

“So, Jinapor is actually claiming that the chiefs are the ones doing the galamsey. So he's telling me, Okyehene, Ya-Naa, Asafohene, Bantamahene, and Ga Mantse are all involved in galamsey, right? Look, I've already told you that the politician is up to something. They are aware that they have failed, so they want to ensure that they won't go down alone,” he argued.

He continued, “They're done with the police service, they have finished fire service, immigration service, CEPS, prisons service and then very soon they'll finish the Ghana Armed Forces, they'll finish all of them, because now if you go to the galamsey areas, they have no respect for the military guys, why? because all the guys in uniform are party boys.”

He added, “Have you realized the Christian Council and Peace Council have all collapsed? they were brought up to calm down the aggrieved youth but the politicians have made them redundant. If they're active, we would be hearing them address issues in this difficult economic times but they have sold their conscience to the politicians for V8 vehicles.”

The outspoken broadcaster warned Mr. Jinapor to change his strategy for a different approach as according to him, “you'll never succeed with this one.”