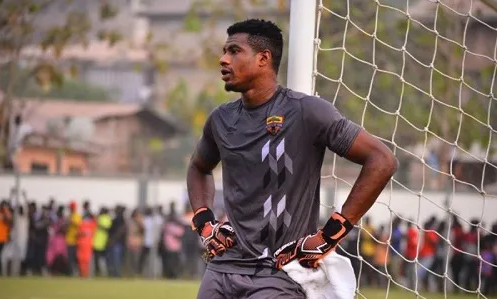 Hearts of Oak goalkeeper Richmond Ayi says that the two best football pitches  he played on in the league last season was the Obuasi Len Clay and the Bechem United Park.

He says these were the two pitches he played on last season which was in pristine condition aside the two astro turf pitches at Karela and WAFA.

"The Bechem and Obuasi Pitches were the best I played on in last season’s Ghana Premier league aside the Astro pitches at WAFA and Anyinase" he told Angel TV in an interview.

Most times playing surfaces in the Ghana Premier has been an issue of concern as most team's play on potatoes pitches which poses danger to players and also affect the aesthetics when it comes to coverage.

The Ghana Football Association promised to construct boreholes at all league centers in order to help water pitches and keep them in good condition but that promise is yet to be fulfilled.

He was also in  post for Hearts of Oak in the MTN FA Cup finals where they defeated Bechem United 2-1 to win the trophy.