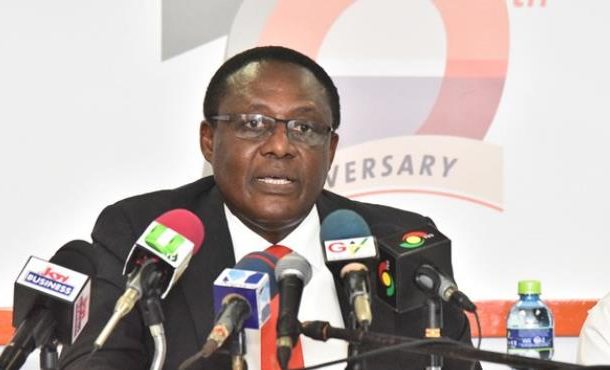 Fidelity Bank has changed its tagline from “The New Standard” to “Believe With Us” as part of its 10th-year anniversary celebrations.

The 2016 Bank of the Year says the new tagline reflects a refreshed and better Fidelity Bank to customers and all stakeholders.

Managing Director and co-founder of the Bank, Mr Jim Baiden, said Fidelity Bank is poised for even greater milestones in the next 10 years. Touching on the new tagline, he said “Fidelity Bank in the past few years has been successful in setting the standard as far as banking is concerned in Ghana and this is evident in the numerous awards won, happy customers and ever zealous workforce. We have demonstrated trust and ability; we want Ghanaians to believe with us to get a better life, complete their education among others. We are asking Ghanaians to join us, bank with us, and believe that Fidelity Bank will help them reach their goals through our unique products and services. Believe with us to go the extra mile and achieve greatness together”.

He noted that going forward, Fidelity Bank will take its business proposition to the next level by inspiring optimism and audacity.

Speaking to journalists at its Ridge head office, Mr Baiden said plans by Bank of Ghana to increase the minimum capital requirement presents a good opportunity.

Although it is yet to be confirmed, analysts say the central bank's minimum capital requirement for commercial banks in the country could be increased to Gh¢500 million from 2017.

“It is foreseeable that not a lot of banks will be able to meet the minimum capital requirement and therefore it is a good opportunity for some banks like Fidelity Bank to acquire other banks,” said Jim Baiden.

He said the bank has chalked phenomenal successes over the past 10 years because of its loyal customers and the hard work of employees.

“There is no doubt that our customers and employees are the reason we have come this far. Their loyalty, commitment and hard work have all translated into making Fidelity a top tier bank in this country. We are forever grateful and we will continue to deliver on our promise to help each other grow”.

“For an indigenous Bank to be ranked as the 4th largest among 28 banks in an industry where international competition exists is indeed a remarkable achievement worth celebrating,” he said.

Recounting the journey so far, Mr. Baiden noted that during its 10 years of operation, the Bank has contributed to national development to the tune of GH ¢ 240 million in taxes.

Through its Agency Banking Model, the Bank has created Smart Accounts for three hundred thousand people who would have otherwise been unbanked.

The Bank has also won about 60 awards notable among them being the Most Socially Responsible Bank and the reigning Bank of the year to crown its 10 years of hard work.

Mr. Baiden expressed gratitude to all stakeholders for believing in the Bank and contributing immensely to its growth.

The celebration which will be a year-long one will be characterised by lots of activities to celebrate with both staff and customers.

Fidelity Bank Ghana Ltd. is the largest private indigenous bank and currently the fourth largest bank in Ghana in terms of customer deposits. FBGL was issued with its universal banking license in 2006, making it the 22nd bank to be licensed by the Bank of Ghana under the new Banking Act, 2004 (Act 673).