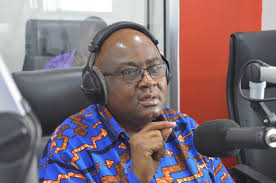 Pollster and Managing Editor of the Dispatch Ben Ephson has given thumps up to the Commander who ordered the soldiers to storm the chamber of Parliament to douse the pandemonium during the election of a speaker for the 8th Parliament.

Mr Epshon explained on the Key Points on TV3 Saturday, February 13, that the best decision any commander could have taken under the circumstance, was to have deployed his men to deal with the situation in order to forestall any destruction to life and property.

His comments come on the heels of the explanation given by National Security Minister-designate, Albert Kan-Dapaah on the intervention of the military in parliament which has been condemned by several dignitaries including former President John Dramani Mahama.

Kan-Dapaah told the Appointments Committee of Parliament during his vetting on Wednesday, February 10, that the President and other government officials were unhappy that soldiers stormed the legislature during the election of the Speaker for the 8th Parliament on 7th January 2020.

He said the Chief of Defense Staff (CDS) has been asked to investigate the matter for the appropriate measures to be taken.

“This is obviously a strange thing when you have soldiers going into parliamentary chamber for whatever reason. When I saw it, I was also alarmed, my colleagues were alarmed, all of us in government were alarmed that something like that has happened. So I did take the trouble to find out how it happened."

“Somebody, a commander, in his opinion, thought that things were getting out of hand in the chamber and that they needed to go there to try to restore order."

“I posed the question, what order? Did you think your presence there was going to frighten the Members of Parliament? No! You were not going to be able to frighten them. Were you going to arrest them? No. You couldn’t have arrested them."

He added: “The CDS has been asked to investigate the matter and to take the appropriate action if he also comes to the conclusion that what was done was unprofessional.”

Sharing his views on this development, Mr Ben Epshon told host of the Key Point Abena Tabi that “When a commander takes decision he is responsible for it. I believe that being outside the interior of what was happening and nobody hadn’t briefed him, if I were to give the commander a pass mark for his initiative at the time, I will give him an A.

“Because when you are outside the perimeter of parliament and you hear angry words exchanges, the soldiers came in they came in with a very dignified manner.”

He added, “The other side of the coin was if the commander had just stood outside and pardon my language, the MPs had knives on them and decided to stab each other will we have criticised the officer in charge of the military that when they heard the noise why didn’t he intervened?”