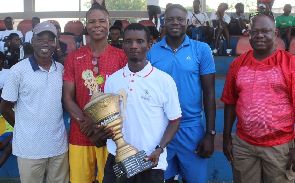 The fourth National Ranking was sponsored by Ismailia Lamptey , Babolat's sole agent in Ghana, Roger Crawford, President of Tennis Foundation Ghana and The Mohammed siblings (Yakubu Mohammed, Alima Mohammed and Salifu Mohammed) who are all currently based in the United States (US).

Akosombo based Fumi broke a sluggish Acquah twice in the first set and thrice in the second in set.

It was Fumi’s third straight win against Acquah and for his efforts, Fumi will walk away with a glittering trophy, an undisclosed amount and a branded Ghana Tennis Federation (GTF) T’Shirt.

“Today is a day to be satisfied, to be happy and to have this trophy,” Fumi told the ghanatennis.org. “This is a very emotional period of the season. I really enjoy these tournaments”.

Acquah, who was visibly emotional, was equally complementary to Fumi: “Fumi played really well; he played out of his mind. Congrats again, it’s amazing,” Acquah said.

Acquah added that “It was such an amazing tournament for me. I was really happy to get this far. It’s obviously disappointing but I can’t be disappointed – I’m literally getting started”.