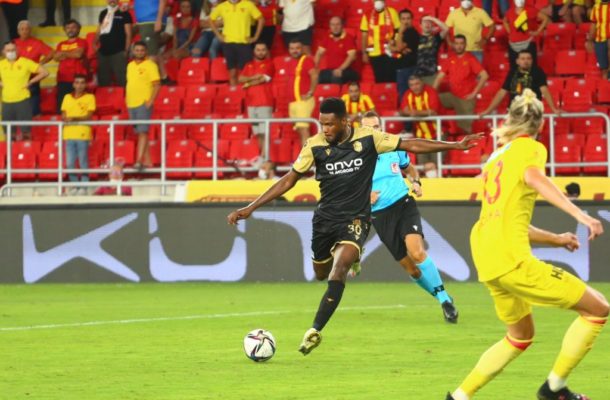 Ghanaian striker Benjamin Tetteh was back among the goals after his injury return on Friday night in Yeni Malatyaspor's 3-4 home loss to Fatih Karagumruk.

The former Ghana youth striker was sidelined in his team's last game due to injury concerns but was fit in time for the game as he was handed a start.

Yeni Malatyaspor the home side started the game on a strong note as they asked all the questions by pressing for the opener and it did arrive in the 18th minute with Benjamin Tetteh the goal scorer.

Mustafa Eskihellac added the second goal for the home side in the 24th minute before Mounir Chouair scored the third goal for Yeni Malatyaspor.

But the away side pulled one back through Andrea Bertolacci  in the 30th minute before Aleksandar Pesic scored a second goal in the 44th minute to  make it 3-2 in favour of Yeni Malatyaspor going into the break.

After the break Andrea Bertolacci  and Aleksandar Pesic each scored to complete their brace each and hand victory to Fatih Karagumruk.

The Ghanaian striker lasted 80 minutes before he was taken off  for his side after enjoying a fine evening despite his team losing.

He has now scored 3 goals in 4 league matches for Yeni Malatyaspor so far this season.