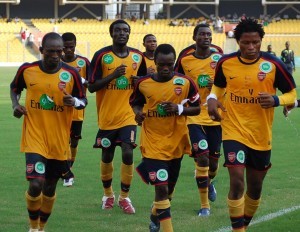 Division One football side Berekum Arsenals Football Club have been declared losers of their Match Day 21 fixture against Tamale based club Tamale Utretch.

Tamale Utretch  protested against Arsenals for failing to pay fines imposed on them by the FA before the fourteen (14) day deadline in contravention of Articles 39(8)(b) to 39(8)(f) of the General Regulations of the GFA.

The Petitioner contended that in the first decision, Berekum Arsenals FC was fined an amount of Five Thousand Ghana Cedis (500) for the club’s failure to honour an MTN FA Cup match against Wa All Stars on Monday, April 11, 2016.

According to the Petitioner, in the second decision, Berekum Arsenals FC was fined an amount of Two Thousand Ghana Cedis (2000cedis)for the misconduct of the club’s Operations Manager, Gordon Arthur on June 8, 2016. While in the third decision the club was fined Five Hundred Ghana Cedis (500cedis) for the misconduct of the club’s head coach, Kwabena Asare on May 26, 2016.

They demanded that Berekum Arsenals FC be declared losers of the match and the three points and three goals should be awarded in favour of Tamale Utrecht Football Academy.

The GFA after perusal of the case nullified the 1:1 result thus giving the petitioner (Tamale Utretch) all three points and a 3:0 victory over the respondents (Berekum Arsenals)..