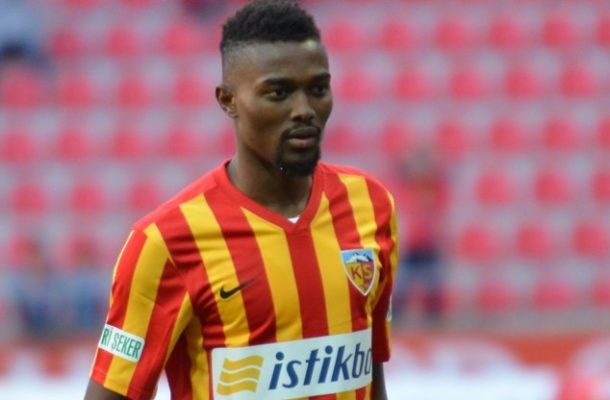 Ghanaian International Benard Mensah has been suspended by his club Kayserispor, over "improper behavior" amid transfer wrangle.

The 25-year-old is having things tough at the Turkish club as sequences events indicate a fractured relationship.

His wish to leave the club has created a row in recent times, with his move to Besiktas blocked by club manager Robert Prosinecki.

An unnamed member of the club management confirmed to the Turkish media that he had not followed "certain club rules" and that he had displayed improper behavior.

But club president Kayserispor President Berna Gözbaşı twittered: "If the coach says, he will stay and stay in the camp tonight. Bernard Mensah, if you are not coming, if you are not attending this camp, if you are in discussion with the teacher at the meeting, Messi does not matter".

Former Atlético Madrid player Bernard Mensah has played 14 games with the Kayserispor in Turkey but has been sidelined for indiscipline.

Bernard Mensah left Spain a few years ago and now plays under the colors of the Kayserispor, in the Turkish championship.

Late last year, he threatened to cancel his contract over the unpaid bonus, but the club dismantled the claim, saying the proper channel must be followed.

But the club in January announced the signing of Portuguese David Simao, describing him as an alternative to Mensah.

He had loan spells with Turkish club Kasimpasa and Portuguese fold Vitoria Guimaraes before transferring to Kayserispor in the summer last year.

He has been a long target of Turkish giants Fenerbahce, one of the club's whose moves has created the row between Mensah and Kayserispor.