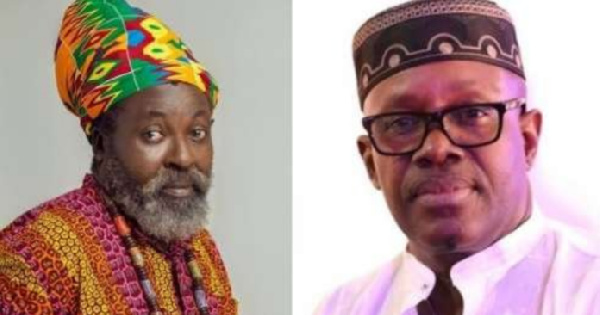 Ras Caleb Appiah-Levi, the Chairman of the Greater Accra chapter of the Musicians Union of Ghana (MUSIGA), has called on the Acting President of the union, Bessa Simons, to abdicate his position before their elections could be held.

Speaking to Kwame Dadzie in an exclusive interview on Ghana Weekend TV on Monday, June 27, 2022, he said it was wrong for Bessa Simons, an aspirant for the presidency, to have been made the Acting President.

Ras Caleb, who is also contesting the President position alongside Deborah Freeman, said there is still some dirt to be cleaned at MUSIGA before they could have their elections.

Asked if he is not being a litigant in the MUSIGA impasse, he said in proverbial terms: “If the car is faulty, and you insist on moving with it, it will leave you on the way.”


Ras Caleb also added that Bessa Simons and Samuel Kofi Agyemang, the accountant of the union, currently have a court case regarding an alleged forgery of signature to withdraw money belonging to the union.

Responding to the announcement by Bessa Simons on Ghana Weekend TV that the voter’s register is now ready and that they are just waiting for the National Elections Committee to set a date for the elections, he said the committee has no power to set the date.

“Bessa, step down. If you don’t step down, we won’t stop bugging you. We will not come to sit on a seat which is very dirty. There is no transparency and accountability in MUSIGA. Why is it like that? It is o easy for you to step down,” he said.

“You need to step down for us to have an interim management committee,” he added.

Ras Caleb Appiah-Levi says Bessa Simons should step down as the Acting President of MUSIGA before they can hold their elections.
Full interview here 😂😂😂 >>> https://t.co/iK7dFM02iD#GhanaWeekend pic.twitter.com/HmX0Yb9i3B

The MUSIGA election which should have been held in 2019 has suffered several postponements.
Ras in 2019, had the union for running an election riddled with anomalies in the voter’s register and operating under rules in contravention of their constitution.

In the wake of the protracted misunderstanding, Bessa Simons who was the 1st Vice-President was made to act as the President until a new election is held.

A week ago, some members of the union in Kumasi led by gospel musician Joseph Mensah, have given the election committee, a one-week ultimatum to hold the elections.