'Better to lose' than restore trainee allowance for votes – Mahama 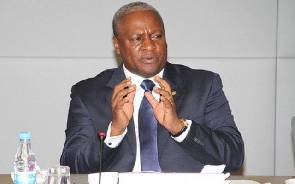 President John Mahama has said he is better off losing the December polls by sticking to his principles than restoring the scrapped teacher trainee allowance for votes.

Mr Mahama said his government will not restore the teacher trainee allowance even if it means losing the upcoming elections.

The scrapping of the allowance by the government was met with stiff opposition from trainee teachers and a section of the Ghanaian public.

Flag bearer of the main opposition New Patriotic Party (NPP), Nana Addo Dankwa Akufo-Addo, has promised that he will restore the allowance, if he wins the elections.

But Mr Mahama on Thursday tweeted: “On the matter of trainee teacher allowances, better to lose on principle than win using falsehood. We'll not reverse the decision. #UCC Forum.”

Mr Mahama had an interaction with students and lecturers of the University of Cape Coast (UCC) on Wednesday.