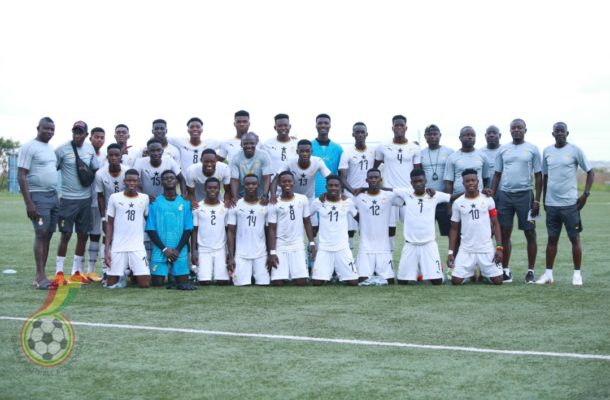 The Black Starlets of Ghana have been eliminated from the ongoing WAFU Zone B Cup of Nations in Togo after losing 3-1 to Ivory Coast.

Ghana stumbled to a heavy defeat missing out on a place in the semi finals of the competition with the defeat on Tuesday afternoon.

The Ivorians took the lead very early in the game as they made very clear their intentions with a well taken strike from  Abdramane Konate in the 9th minute.

Ghana had several penalty appeals turned down by Togolese referee Vicentia Eyonam Amedome to the chagrin of the players and the technical bench who felt they were hard done by the officials.

Two minutes after recess Charles Likpa Miezan added his second goal of the game after lax defending from Ghana.

It did not take long before the Ivorians took the game beyond Ghana as Emmanuel Don,extended the Ivorians' lead, converting to make it 3-1 after Togolese referee Vincentia Enyonam Amedome pointed to the spot.

The Black Starlets have missed out of the final of the competition for a second straight tournament after reaching the stage at Niger 2019. At the last tournament, they finished as losing finalists.

The result means Ghana finish third and bottom in the three-team group, behind leaders Cote d'Ivoire and runners up Nigeria who qualify for the semi-finals. The Starlets and Nigeria played out a 1-1 draw in their opening game.

The tournament champions, first runners-up and second runners-up will in turn qualify for the Africa U17 Cup of Nations (Afcon) in Morocco later this year.