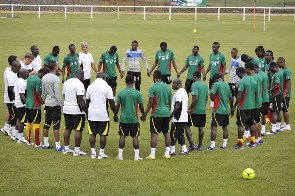 The senior national team, Black Stars on Tuesday, commenced training at the Accra Stadium as they begin preparations for their opening 2018 World Cup qualifying match against the Cranes of Uganda.

As many as 20 of 23 invited players reported for the first training session, made up of two locals and 18 professionals.

Jeffrey Schlupp, Thomas Partey and goalkeeper Adam Kwarasey were the only players to miss the training.

Their first training slated for Monday was called off because majority of the players had not arrived in the country.

The team will depart for Tamale today at 4pm and continue preparations there when they arrive in the Northern region.

Ghana will be hoping for a positive start to the qualifiers against Uganda at the Tamale sports stadium on Friday, October 7.