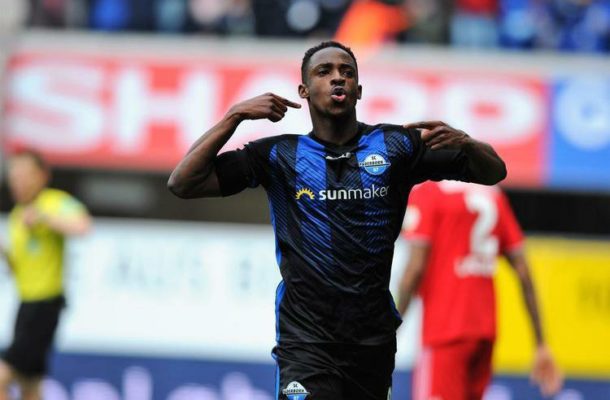 Black Stars forward Christian Antwi-Adjei scored the winner for his side SC Paderborn in their German Bundesliga II game on Saturday after against Sandhausen.

Paderborn defeated Sandhausen by 2-1 in their home game in the German lower tier league.

It was a hard fought victory for the host as they had to come from a goal down to secure all the three points in an enthralling encounter.

The away side Sandhausen took the lead in the 15th minute of the game through Besar Halimi with a ferocious strike from outside the box into the bottom right corner.

Paderborn pressed for the equalizer and it duly arrived with nine minutes to half time through Dennis Srbeny's right foot strike from outside the box to level things up before the break.

In the second half Ghanaian International Christian Antwi-Adjei scored the winner in the 74th minute after being teed up by Johannes Dörfler as he shot into the roof of the net to make it 2-1 for the host.

The 27-year-old forward has played 18 times this season for the lower tier side scoring his only goal this weekend after breaking his 17 games goal drought in the Bundesliga 2.