‘Blows’ At KMA Over Election Of Presiding Member 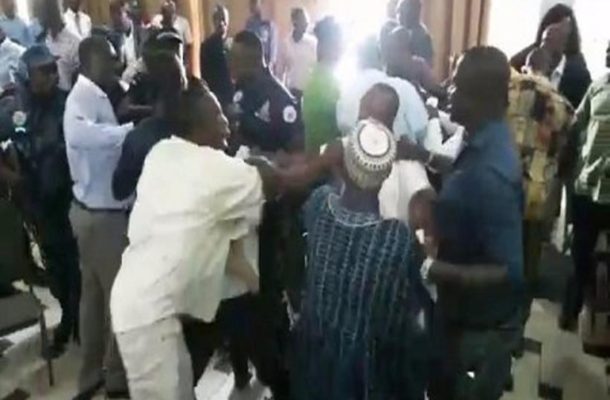 The long running bid to elect a Presiding Member for the Kumasi Metropolitan Assembly (KMA) Tuesday degenerated into confusion after a fight broke out between Assembly members.

Blows were exchanged for a second time as members of the KMA met for the fifth time to try and elect a presiding member.

Luv FM's Erastus Asare Donkor who was at the venue reported that, the scuffle begun when one Yakubu Tony Aidoo accused the assembly members of being corrupt – which in his opinion is to blame for the delay in electing a Presiding Member.

His comment angered an assembly member from Ayigya whom according to reports, gave Yakubu some dirty slaps.

But for the intervention of some assembly members, Erastus said the scuffle between the two would have turned bloody.

The scuffle however happened at the blindside of the Regional Minister, Alexander Ackon who is having a meeting with the assembly members prior to the election.

The two contestants are Abraham Boadi popularly known as Opoman who is the Ridge Nhyiaso Electoral Area and Samuel Adusei.

This was after Nana Kofi Senya – perceived to be the New Patriotic Party (NPP) choice and Nana Adumhene, reportedly the National Democratic Congress (NDC) step aside after they failed to secure the two-thirds majority votes required by the law.

The KMA has 147 members, 91 of them elected, 44 appointed and 10 ex-officio members, who are Members of Parliament (MPs). The absence of a Presiding Member is said to be hampering activities at the assembly.

But Erastus Asare Donkor said the election is likely to be called off as many assembly members are filing out of the meeting room angry.