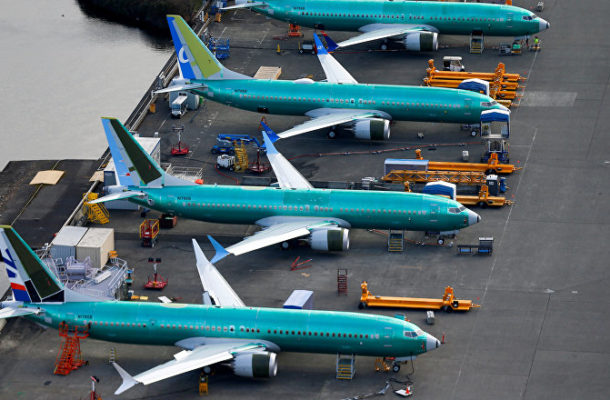 "After many scenarios, same flights in all regimes with these pilots, there was a consensus opinion from the pilots — the European, Canadian and American pilots — that there was no market difference in the handling characteristics of these two aircraft…. Their unanimous opinion was flight training was not needed," Elwell said in his testimony before the US Senate Subcommittee on Aviation and Space.
Elwell also noted that there was no specific instruction in the self-administrated online course for pilots of the 737 MAX on the Maneuvering Characteristics Augmentation System (MCAS). READ MORE: US Transportation Dept ‘Special Committee' to Review Boeing 737 MAX Certificate On 14 March Chairman Peter Defazio and House Aviation Subcommittee Chairman Rick Larsen said that the House Committee on Transportation and Infrastructure would conduct an investigation into why the Boeing 737 Max 8 series aircraft was certified without additional pilot training, despite changes to prior safety systems.

©
REUTERS / Joshua Roberts Faulty Anti-Stall System Could Crash Boeing 737 MAX in Just 40 Seconds – Report
Earlier the US government has issued an emergency order to ground all Boeing 737 Max 8 and 737 Max 9 series aircraft following the deadly crash of an Ethiopian Airliner.
On 10 March, a Boeing 737 Max 8, operated by Ethiopian Airlines, crashed minutes after takeoff from Addis Ababa, Ethiopia, killing all 157 people from more than 30 countries on board.     READ MORE: Boeing 737 Max Makes Emergency Landing at Florida Airport — FAA The crash in Ethiopia was the second fatal incident involving the narrow-body aircraft in less than five months. In late October 2018, another Boeing 737 MAX 8, operated by Indonesia's Lion Air, plunged into the Java Sea shortly after take-off, claiming the lives of 189 people. According to the preliminary investigation, the plane's sensors were showing incorrect speed and altitude readings.
In the wake of the crash in Ethiopia, aviation authorities and carriers around the world, including in Australia, Canada, India, New Zealand, France, Germany, South Africa, the European Union, China and Russia, have either grounded all 737 Max 8 series aircraft or closed their airspace to them.    Source: sputniknews.com