BoG announces plans to give out shares in NIB and ADB 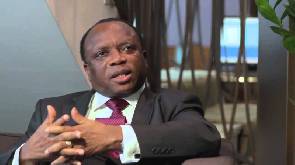 The Bank of Ghana (BoG) has announced plans to renounce its ownership of two banks in the country.

The Ghanaian Times reports that M. Millison Narh, the first Deputy Governor of BoG disclosed this at a roundtable discussion with the State Owned Enterprises (SOEs) and institutional investors in Accra.

He said, the move was to ensure the BoG established an impartial supervisory system based on new laws that are being passed.

Mr Narh said the BoG would transfer its ownership in the two banks to the government, who will then become majority shareholders.

The round table organised by the Ministry of Finance was to educate the participants on the Public Financial Management Act, Act 921 to among others, ensure financial prudence by the government and state agencies and organisations.

It was also to explain to the participants the economic turnaround being recorded by the country through the home grown policies initiated by the government and the country’s adoption of the Extended Credit Facility by the International Monetary Fund.

“To start with the BoG is seeking to transfer its shares in the National Investment Bank, to the Government of Ghana, who will then become majority shareholders. Government will then transfer ownership through strategic investors to inject capital and improve efficiency in the bank,” he said.

The transfers of shares, Mr Narh said would ensure that the BoG’s role was reduced to oversight responsibilities to ensure the integrity of the financial system.

“In addition to these, the BoG has proposed an increment to the minimum capital base for all banks to improve on their core functions of financial intermediation,” the First Deputy Governor said.

Mr Narh said the BoG was pursuing a number of reforms to build a vibrant banking and financial industry to spur growth of the economy and mentioned some of the reforms as the yet to be passed Specialised Deposit-taking Institutions and Deposit Protection Bills.

The Minister of Finance, Mr Seth Terkper said the home-grown policies and the IMF consolidation programme being pursued by government were beginning to yield results.

He said through the programmes, the macroeconomic instability recorded by the country had been addressed and the economy was on the path of growth, adding that Moody, an international credit rating agency, has revised its crediting rating on Ghana from B minus to B plus and urged other credit rating agencies to revise their credit ratings on Ghana.

Mr Terkper also said for the past two years the country debt stock had been decreasing, saying that the Sinking Fund established by government was helping to raise revenue to retire some of the maturing debts.