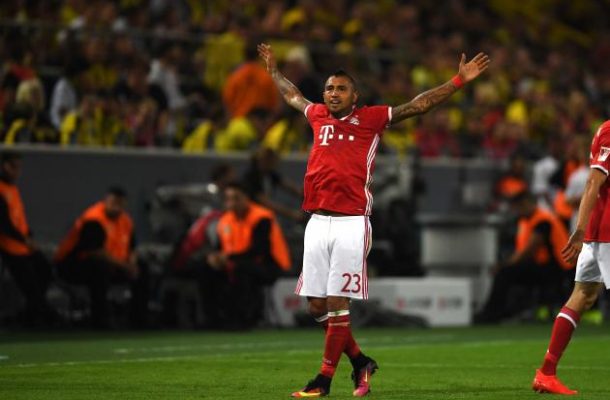 Bayern Munich beat archrivals Borussia Dortmund, 2-0, to claim the German Supercup for the first time since 2012 on Sunday.

In a fascinating encounter, second-half goals from Arturo Vidal and Thomas Muller sealed the victory for the 2015-16 double winners.

BVB had chances themselves to win the match but were profligate in front of goal, while Bayern took the opportunities they were offered.
Dortmund started the brighter side, and Javi Martinez had to make a vital intervention in the eighth minute to prevent Pierre-Emerick Aubameyang from breaking through on goal.

BVB goalkeeper Roman Burki had some work to do early on as well to claim Thiago Alcantara's dangerous ball from the left, but Bayern had no clear-cut chances in the opening exchanges.

It was a feisty atmosphere, unsurprisingly, and Franck Ribery was arguably fortunate to stay on the pitch when he threw an elbow at 18-year-old Felix Passlack just before the half-hour, said the Times' Gabriele Marcotti.

Burki then denied Vidal from point-blank range, keeping out the Chilean's powerful header and staying big as he missed the follow-up.

There were no goals in the opening half, but it was a breathless and intriguing encounter, per German football expert Cristian Nyar.

The pace was maintained after the break, and Dortmund almost took the lead in the 50th minute, but Manuel Neuer denied Passlack.

Ousmane Dembele unleashed a shot that was deflected into the young German's path in the box, but the Bayern No. 1 diverted his shot well past the post.

Eight minutes later, Vidal did make it 1-0, his first attempt from outside the box only parried by Burki, and this time the midfielder made no mistake as he clipped home the finish as he followed up.

Per German football writer Stefan Bienkowski, the Dortmund goalkeeper could have done better on the initial shot.

Having looked the better side for much of the game, it was a hammer blow for Dortmund to go behind.

They maintained their level and did not let their heads drop, but Bayern then provided the knockout blow 11 minutes from time.

Hummels rose well to meet a corner from the right, and he headed the ball down to Muller's feet three yards out.

The forward made no mistake as he tapped home to seal the victory for Bayern and provide new manager Carlo Ancelotti with his first piece of silverware at the club.