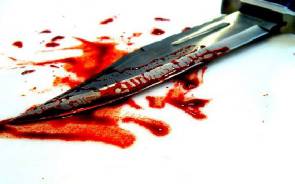 A 20-year old school drop-out Peter Ofori is in the grips of the New Edubiase Police Command for butchering his 80 and above grandmother Obaapanin Ama Agyei at a cottage Tuam Number one near New Edubiase.

The grandmother was found in a pool of blood at the cottage by the police.

The suspect who however fled the area after the incident, was fished out of his hideout in Koforidua and confessed to the heinous act.

Speaking to Ultimatefmonline.com via phone, the Adansi West District Police Commander Assistant Superintendent of Police (ASP) Asenso Duah, said the suspect was arrested in Koforidua after collaboration with the Koforidua police command.

He explained that they got hint of an information that an old woman had been killed in a bush at the cottage.

‘Upon reaching the cottage after receiving intelligence, we realised that the woman 80 years and above was lying in a pool of blood with cutlass wounds at the back of her neck. He confessed that a fetish priest who performed some rituals told him that his destiny was exchanged when he visited the shrine, he also told us that he had been having nightmares and so accused the grandmother of being behind this. He therefore killed him when the rest of the family had gone for a Parent and Teacher Association (PTA) meeting,’ he explained.

The body has been deposited at New Edubiase Government hospital for autopsy, whiles the suspect is being processed for court.