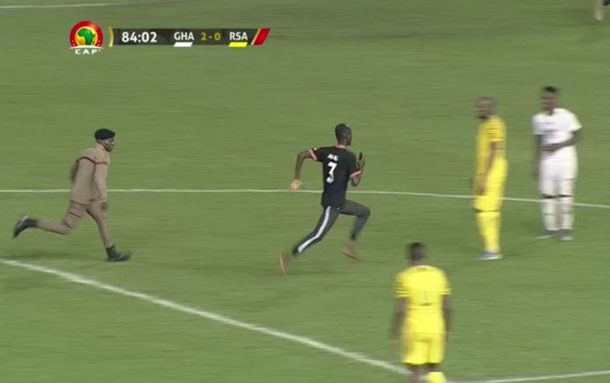 Cape Coast Pitch invader Awal Suleman has been fined GH 2,400 by a court in Cape Coast.

Awal Suleman jumped on to the pitch when Ghana played South Africa in the Afcon 2021 qualifier at the Cape Coast stadium.

The accused was granted bail on Saturday but appeared before court on Thursday and pleaded guilty for disturbing the peace and resisting arrest.

The charges according to Lawyer Asuama Yeboah were to serve as a deterrent to others.

Lawyer Asuama Yeboah Junior in an interview explained the proceedings at court, “The court took a lot of factors into consideration. He is a first time offender so he was charged with disturbing the peace and resisting arrest.

“So looking at the factors the court didn’t want to give him a non-custodian sentence but rather send a signal out there to deter others. So he was given a fine of 200 penalty unites for the second charge which is the resisting arrest and for the first charge to sign a bond of good behavior and in default three months in prison”.

He further said, Awal’s remorse after the incident and pleas from the Black Stars players and coach also factored in the verdict.

The accused had explained that he went onto the pitch to take a selfie with his idol Thomas Partey.