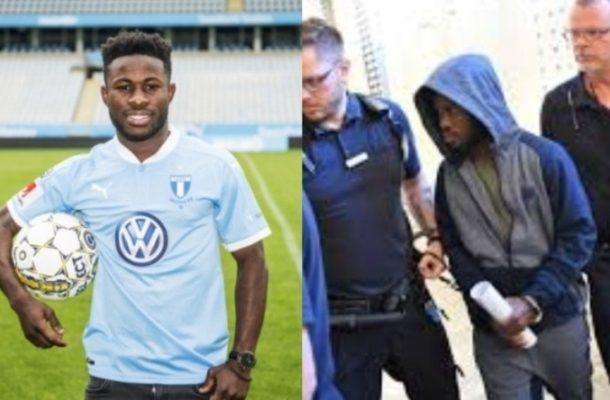 Disgraced Ghanaian midfielder Kingsley Sarfo has now found a new club and home in Cyprus as he has signed for Cyprus club Olympiacos Nicosia.

Sarfo is reported to have  signed a two-year contract with the team in Cyprus.
He was jailed for two years and eight months in Sweden for two counts of child rape , a Malmo District Court ruled in June 2018.

His appeal to have the sentence overturned was rejected five months later meaning he had to serve all the jail sentence.

It was last winter when Kingsley Sarfo was released from Swedish prison after serving his 2 years and 8 months sentence for rape of a child.

The former Malmö FF and Sirius player has been clubless since then.

According to Sportbladet, he has found a new employer with Cypriot club Olympiakos Nicosia.

The 25-year-old from Ghana has signed a two-year contract and will soon be joining the club, which finished ninth in the series last year and is eight after two rounds this fall.

Sarfo was recruited into the MFF by Sirius in the summer of 2017 for around 15 million Swedish Kroner.

The club broke the contract after the midfielder was sentenced to more than 2.5 years in district court and ten years of deportation for rape of children.

His lawyers have lodged an appeal after gathering fresh evidence.