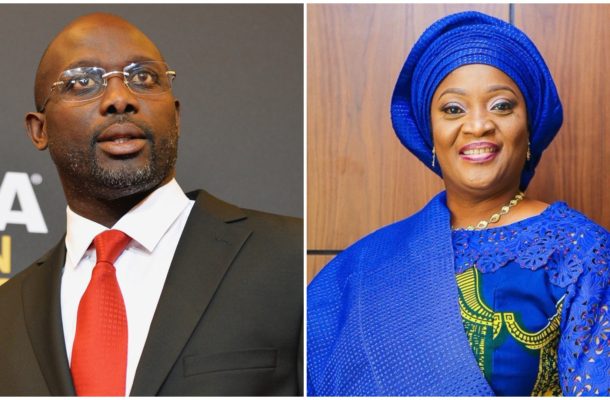 Former soccer star George Weah has defeated Vice President Joseph Boakai to win Liberia’s presidential run-off election with 61.5 percent of the vote based on 98.1 percent of ballots cast, the election commission said on Thursday.
Weah will succeed incumbent President Ellen Johnson Sirleaf next month in what will be Liberia’s first democratic transition since 1944.

This comes after Ghanaguardian.com exclusively revealed two days ago that the former striker has won the run-off election after winning 13 of the 15 counties in the country.

Now the NEC statistics have revealed that with just about 2% of the votes to be counted Boakai would be unable to overturn the return in his favour making Weah the President in-waiting.

Weah supporters paraded through the streets of the capital Monrovia and honked car horns to celebrate the news.

Weah grew up in Clara Town slum in Monrovia and went on to star for AC Milan, Paris St Germain and Chelsea and become the only African to win FIFA World Player of the Year.

His rags to riches story helped him tap into dissatisfaction with Johnson Sirleaf’s 12-year tenure, which drew a line under years of civil war but was criticized for failing to root out elite corruption or persistent poverty.

Liberia is Africa’s oldest modern republic and was founded by freed U.S. slaves in 1847. Its last democratic transfer of power occurred in 1944 and was followed by a military coup in 1980 and a 14-year civil war that ended only in 2003.

The U.S.-based Carter Center said there were “notable improvements” in the handling of Tuesday’s vote from the first round in October, echoing positive assessments from other international observers.

He will succeed Ellen Johnson Sirleaf, Africa's first elected female president. She defeated Mr Weah in the presidential election run-off in 2005, after the end of a brutal civil war.

Mr Weah played for a string of football clubs, including AC Milan and Paris St-Germain, and is the only African footballer to have won Fifa World Player of the Year and the coveted Ballon D'Or, in 1995.

He entered politics after his retirement in 2002 and is currently a senator in Liberia's parliament.