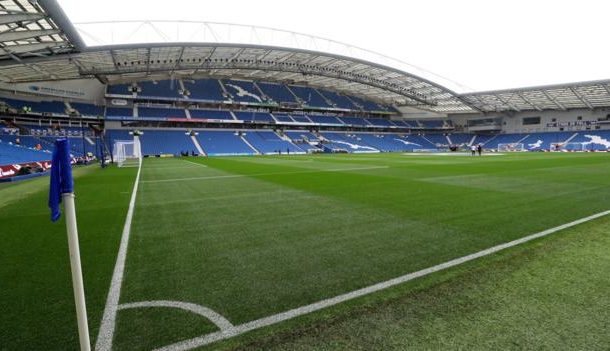 Brighton have issued a statement expressing their dismay at recent incidents involving football supporters "that are shaming our sport".
This month, a fan threw a banana skin, Raheem Sterling suffered alleged racist abuse, Chelsea fans made anti-Semitic chants and a bottle struck Dele Alli.
There were also reports of homophobic chants at a Huddersfield-Brighton game.

Brighton said: "It appears a worrying trend is developing - we wish to play our part to stop this in its tracks."
Tottenham fan Averof Panteli, 57, was handed a lifetime ban by the club for throwing the banana skin in the direction of Gunners players during the north London derby at Emirates Stadium on 2 December.
He was also banned from football for four years and fined.
After a vocal minority of Chelsea fans chanted offensive songs about Tottenham fans during their team's Europa League match with MOL Vidi in Hungary on 13 December, anti-discrimination group Fare said some football supporters were using the "political atmosphere as a cover for their own racism and prejudice".
Less than a week earlier, England forward Sterling appeared to be targeted by Chelsea fans behind the goal during Manchester City's defeat at Stamford Bridge on 8 December and later said that newspapers "fuel racism" by the ways in which they portray young black footballers.
Arsenal say they have identified an image of the person who threw the bottle at Alli during Wednesday's Carabao Cup quarter-final, while Huddersfield are investigating the homophobic chanting reports from Brighton's 2-1 win at the John Smith's Stadium on 1 December.
The Seagulls statement continued: "As we head towards 2019, it's disturbing that some people seem to think it's acceptable to behave in an anti-social manner at football matches.
"Racism, homophobia, anti-Semitism, discrimination and violence have no place in society, let alone in a football stadium."
Brighton admitted that number of home and visiting fans ejected from the Amex Stadium and arrests for so-called "hate crimes" during this season and last has already doubled the total of the previous three seasons combined.
Albion promised to "seek criminal prosecutions in all cases" of misbehaviour by fans and added: "Our stadium and ticketing bans for any offence involving hate crimes and/or violence towards players, staff, officials or other supporters are for an indefinite period, with the earliest possible review only considered after five years." Source: bbc.com