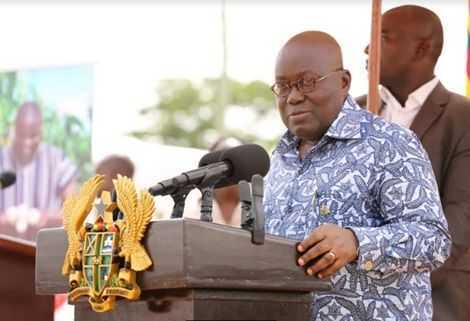 President Nana Addo Dankwa Akufo-Addo has stated that his government has cleaned up the “big mess” it inherited in the economy, following which the current outlook is pointing in the right direction.

He stressed that already the gloomy economic indicators it inherited had been turned around and, therefore, the 2019 budget statement would reflect the hope the people had in the government and the future of the country.

The President administered the oaths of allegiance, minister of state and secrecy. He also presented them with their instruments of appointment after which they signed the oath book.

No reason to be poor

President Akufo-Addo reiterated that there was no reason for the people of Ghana to be poor because God had endowed the nation with everything that it required and that if Ghanaians put them together properly, they would be wealthy and developed.

He said his administration had delivered some of the promises it made to the people and there were still others to be accomplished but if they continued to work hard and kept their eyes on the ball, he was confident that after the four years they would be able to give a good account of themselves to the people of Ghana.

The President told the appointees that they would be exposed to all kinds of things in the public domain, including allegations against them, but advised them not to be distracted but focus on helping the government to deliver on its mandate.

President Akufo-Addo urged them to work in tandem with their colleagues and cooperate with one another so that they could deliver, stating that through personal observation, he had come to realise that cooperation was most important in governance.

He cautioned them against rivalry and competition among themselves but urged them to bear in mind that they were working to complement one another towards a common goal so that the promises they made to Ghanaians would be delivered.

Speaking on behalf of the appointees, Mr Oppong-Nkrumah commended the President for the honour done them and promised him that they would work assiduously to ensure that the President realised the vision he had for the country.