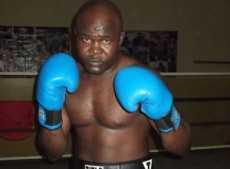 Boxer Bastie Samir – the man who ended Bukom Banku’s unbeaten streak sometime last year- has revealed that a planned rematch with his opponent is stalling because Bukom Bunku is afraid of losing to him for the second time.

Last October, Bastie Samir knocked out Bukom Banku at the SSNIT boxing Emporium in Bukom, in a manner that sent shockwaves through the boxing fraternity.

A crestfallen Bukom Banku accepted defeat in the immediate aftermath of the bout but begged to be given a chance to redeem himself which Bastie obliged.

The two boxers thus signed an agreement with Boss Office Promotions in March this year, with a rematch slated for June 30. However, the rematch never saw the light of day and Bastie says Bukom Banku is to blame for the no-show.

“Right now I am just training and talking with my camp and certainly before the end of this year, maybe in November, I will fight. I was supposed to give Bukom Banku a rematch which I did but it didn’t happen. I don’t want to go into the details of why it didn’t happen because it is a lot of things. We signed the contract but he was saying that for some reason he couldn’t fight. The truth is that I am not waiting for anyone because I want to fight and get to the top and bring a world title to Ghana.,” Bastie told media men on the sidelines of an event to open the new office for the Ghana Boxing Authority.

It will be recalled that earlier this year, April to be precise, Briamah Kamoko, popularly called Bukom Banku implored Boss Office Promotions, official promoters of his bout with rival Bastie Samir to postpone the much-publicized rematch.

According to Banku, he and his trainers have decided that he needs at least two bouts to get him in shape for the rematch with Bastie Samir.

The duo had earlier agreed to stage a second fight in June, but Banku says he would prefer December 26 in an interview with Utv.

“I want the fight with Bastie to be postponed. Because I don’t think the June 30 date will help me. I need to fight at least two fights to regain my stamina and be ready for Bastie Samir. I made a mistake in the first fight which allowed him to defeat me but this time around I am doing everything right. I want December 26 as the new date. It would be boxing day and a perfect day for the fight,” Banku said.

Last year, Bukom Banku lost his first ever career fight to Bastie Samir at the Bukom Boxing Arena in Accra.

That knockdown and defeat led to pronouncements that Bukom Banku was finished and could never stage a comeback.

Bastie, 31, has an impressive record of knocking out all his opponents in his 16 bouts while the 37-year old Banku has 29 wins and one defeat in 30 fights.