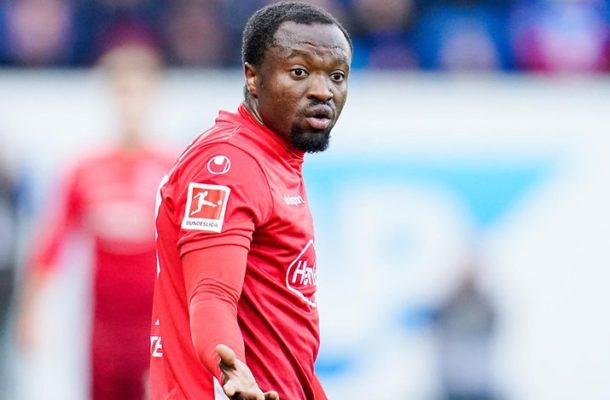 Interest has been shown by the Bulgarian top club Ludogorez Rasgrad in Ghana's Bernard Tekpetey, the champions in Bulgaria, who recently secured the championship title for the ninth time in a row and most recently played in the Europa League and also in the Champions League.

It was a season to forget for Bernard Tekpetey. At Fortuna Düsseldorf, the striker played only a minor role. But now the door to international football could even open for the Schalke loanee.

He has  categorically excluded staying in Düsseldorf.

After a good start in Düsseldorf, there was nothing left of the winger in the second half of the season. Especially in the crucial phase, Tekpetey played no role: after initially failing to play under Friedhelm Funkel, Uwe Rösler did not rely on the fast offensive man from Ghana.

At the beginning, Funkel warned that Tekpetey should participate more in defensive work. But after a good start, the winger dived completely.

"He had already shown himself in the preparation," recalls sports director Uwe Klein, "but after that he was not able to implement that in the games at all."

Fortuna Düsseldorf would certainly not put any obstacles in the way of the recently extremely hapless attacker Bernard Tekpetey.

Tekpetey, who was discovered by former German International, Gerald Asamoah in Ghana, has been on loan from FC Schalke to Düsseldorf for two years.

So will he be playing in his second season on the Rhine?

In the second division, the 22-year-old should be able to do much better, as he had previously proven in Paderborn. Tekpetey contributed ten goals and six assists in the year of the rise of East Westphalia, and the Fortunes after their relegation should also hope for this offensive strength.

If the Bulgarians are really serious, then it should hardly matter that Tekpetey is still under contract with FC Schalke and is actually on loan to Fortuna until next summer.

This hurdle would also surely be overcome, especially since Tekpetey made a clear statement about his future: "I will definitely not stay with Fortuna and will no longer play under this coach," said the 22-year-old Ghanaian from "Bild".

Tekpetey consultant Jerry Brempong also complained about the sports management: "The trust that the coaching team has in Bernard is zero. The same applies vice versa." Fortuna's manager Uwe Klein sees the case calmly. "If a player is disappointed, he cannot simply say that he doesn't want to come anymore. He has signed a contract. Bernard can add a lot to us next season." But that's probably more of a tactic. Ultimately, the Fortuna Tekpetey would probably not put any stones in the way.