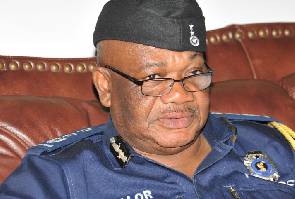 Police Patrol team officers who arrested their colleague officers who were engaged in a bank robbery in the Eastern Region have been promoted.

On 15 August this year, two police officers and a civilian were arrested in connection with an attempted robbery of a GCB Bank bullion van at Maame Krobo in the Afram Plains South District of the Eastern Region.

The driver of the van was killed in the incident while a police officer accompanying the van also sustained gun wounds.

Announcing the promotion at his induction ceremony, Inspector General of Police (IGP), Mr John Kudalor the IGP, condemned the two police officers who were involved in the robbery saying such acts will not be tolerated in the law enforcement body.

He added that measures have been put in place to ensure a peaceful election come December 7.

“It is gratifying to note that the patrol team that effected the arrest of their colleagues have been promoted effective yesterday to their next ranks. In addition to maintaining general law and order in the country, one cannot lose sight of the fact that we have to also ensure that the December 2016 election will be delivered peacefully and successfully. On that score, I can assure the people of Ghana that we are committed to attaining that feat. With the support of all Ghanaians, we shall overcome,” the IGP stated.

Mr Kudalor called on stakeholders to support the police to make the election violence-free.

"On the part of the police I can say emphatically that adequate preparations have been made. We are set in terms of human resources, logistics and equipment. However, we as police have … [extended an invitation] to our stakeholders namely the Electoral Commission, the political parties, the media, the traditional rulers, the National Commission for Civic Education and the clergy to come on board so that we can do things together”.