Burundi's football, and everything continues in the face of the coronavirus pandemic 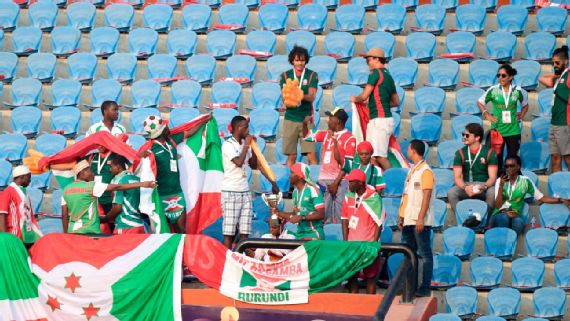 While football across Africa has been suspended amidst the coronavirus pandemic, sport in Burundi continues unabated, with the Central African country yet to record a case of COVID-19.

The tiny nation -- with an area of 27,834 km2 [just slightly bigger than the state of Maryland] -- is one of the few territories in the world yet to be officially touched by the virus, and one of only a handful of countries worldwide where domestic football, and anything else with a crowd, continues.

The men's President's Cup and second division matches, as well as the top two tiers of women's football, took place across the country this weekend, with fans in attendance, although it's a decision that is proving divisive among the country's footballing community.

Even though they play on, and opinions differ about that decision, Burundi is not ignorant of the external threat of COVID-19, and have already taken drastic steps to seemingly prevent their first case.

They were among the first African nations to appeal to the Confederation of African Football to reconsider the scheduling March's Africa Cup of Nations qualifiers, having refused to call up any Europe-based players for their double-header against Mauritania.

"The measure is taken because of the 14 days' quarantine required to enter Burundi after having been [in Europe]," read a statement on the BFF's website on March 13.

Since then, the country has yet to record a confirmed case of coronavirus, with strict measures being observed to limit the flow of people into the nation's territory.

Only cargo planes are allowed to land at Bujumbura International Airport, while anyone arriving from affected countries must observe two weeks of quarantine.

"We respect the government's measures," Jeremie Manirakiza, the Executive Secretary of the Burundian Football Federation, told ESPN. "I believe that the problem is to treat this in a global context.

"It's like [Catholic] Mass, many countries have closed the services, but in Burundi, they continue. There are no cases confirmed here, and no other explanations [needed]."

The decision to continue playing reflects the regulations across the country, where weddings, conferences, meetings and various forms of other entertainment continue without restriction.

It's also generated support from the country's other sporting stakeholders, with domestic basketball, beach soccer and volleyball competitions also being conducted at the weekend.

"The government has taken the necessary measures, except confinement," Liliane Nshimirimana, President of the Association of Sports Journalists in Burundi, told ESPN.

"I support the idea of respecting the measures that have already been taken, but as there are no positive cases detected, nothing is preventing us from continuing our activities, including sports.

"We feel we're safe. The local players are going ahead, relaxed, everyone is in agreement and these are measures set by the federation.

"All of the players and their teams are available and they are playing as normal. For those of us who are here in the country, we have no problems.

"We all agree that we should continue with our activities, there is no fear, or panic."

While Burundi goalkeeper Justin Ndikumana has experienced first-hand the impact of coronavirus when the Kenyan football authorities closed down domestic football for his employers, Sofapaka, he can understand why there's a different approach in his homeland.

"There still aren't any cases in Burundi, so activities are continuing freely as normal," he began. "They've closed the borders, and even the airport, so if there are no people coming from outside, then there will be no contamination, although it is risky.

"We'll wait to see what happens in June, as nobody knows exactly what's waiting for us."

Ndikumana understands why Burundi haven't yet followed the steps of their regional neighbours, including Kenya, where football was halted after three cases had been confirmed.

"Here, as they already had positive cases, it was responsible to take this decision," he added, "because the contamination of the virus happens very fast and you just don't know."

Burundians outside the country, who witness first-hand the impact of the virus in their adopted nations, appear more sceptical about their homeland's approach to preventing the virus's spread.

Nshimirimana acknowledges that the Burundian diaspora have offered words of warning, with only eight African countries still without a confirmed case, and Burundi the only one of those to continue with sports.

She said: "There are Burundians in exile who are the ones who go on social media and write things like how Burundi will have positive cases [despite the lack of such results], but there aren't any, honestly, I swear in God's name.

"Here in the country we all agree on observing the preventative measures taken by the government and we continue with our activities."

Laudit Mavugo, who represented Burundi at the 2019 Africa Cup of Nations, has expressed concern about the country's handling of events and gatherings, and the broader approach taken by the authorities.

He told ESPN: "They say that there's no pandemic over there, but I don't think so.

"Of course [there are cases] but I don't know why they say that [there aren't]. Really, it's shocking, and of course I'm afraid for my country. I still have family there.

"Everyone says God will protect the country, but it's not a good reason to still play."

The striker is currently in self-isolation in Zambia, where the Super League has been closed down, and is witnessing first-hand how COVID-19 can impact African football.

It's a similar story for Equatorial Guinea-based youngster Jules Ulimwengu, whose move to Chinese second division side Shaanxi Chang'an Athletic fell through in late 2019 due to the onset of the virus.

"Here, the championship has stopped," he told ESPN. "It's serious, [in Burundi] and they will stop, because they've already closed nightclubs, and bars [have a curfew].

"I don't really know why football is carrying on, and I don't agree [that there are no cases in Burundi], but honestly I don't know."

The 20-year-old has expressed concern about his family's well-being, although has been unable to return home from Equatorial Guinea due to the travel restrictions placed on those based overseas.

Ultimately, the decision to halt domestic sports will likely only be taken by the federations themselves, if and when the government and the influential Catholic Church adopt a different approach and transmit a different message.

This weekend, the archbishop of Bujumbura, Gervais Banshimiyubusa, launched a passionate appeal for people to pray to combat the virus, but insisted that church doors would not be closed and Mass would not be cancelled.

The church has, however, introduced measures such as avoiding physical contact during church services and instructing those who are coughing to remain at home.

In a country where the Catholic Church has great influence over the public psyche, Banshimiyubusa will be one of several key figures in setting the tone in future.