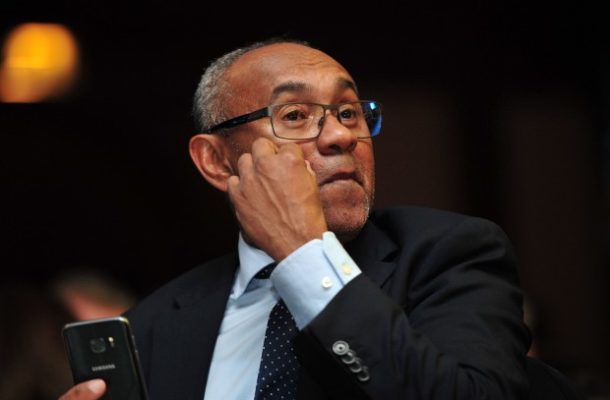 On Wednesday, the Fifa vice-president from Madagascar announced his intention to go for a second term in office when Caf elections take place next March.

This could now be in doubt after the investigatory chamber of football's world governing body determined that he has breached various codes of conduct.

The next step is for the adjudicatory chamber to hand out its sentencing, a source said, adding that this will possibly happen by the end of November.

Any ban is likely to rule out Mr Ahmad's chances of standing for re-election, given he would have to pass an eligibility test to resume his place on the Fifa Council.

Tactical Steel is a little-known French gym manufacturer, run by an old friend of Mr Ahmad's then attaché Loic Gerand, which provided sportswear equipment to Caf in 2017 after an original deal with Puma was cancelled.

At the time, Mr Ahmad denied accusations of any wrongdoing in the deal as 'totally false, malicious and defamatory'.

A Fifa spokesperson refused to comment on the ethics case when contacted by BBC Sport Africa.

"Please note that as a general policy, the independent Ethics Committee does not comment on potential ongoing proceedings nor on whether or not investigations are underway into alleged cases," the spokesperson said.

"As usual, any information the Ethics Committee may like to share will be communicated accordingly upon their indications."

Earlier this week, Mr Ahmad refused to comment on the investigation.

"I don't want to talk about it, especially as the investigation/inquiry is ongoing - (and) there is a respect of confidentiality surrounding an ongoing process," he said.

On Wednesday, the BBC again approached Mr Ahmad for comment but has yet to hear back. Mr Ahmad has previously strongly denied any wrongdoing.

Fifa conducted an audit into Caf last year which - when leaked in February - described Mr Ahmad's organisation as being in 'disarray' while questioning the body's accounting, its governance and its payments.

At the time, the audit recommended further investigation into the deal with Tactical Steel.

Mr Ahmad has also been investigated by French anti-corruption authorities who questioned the Malagasy in Paris in June 2019. He has not been charged with any offence.

The former vice-president of Madagascar's Senate has led African football since 2017, when he dethroned long-standing ruler Issa Hayatou.

Caf's next presidential elections take place in March 2021 in Morocco, with the registration deadline for candidates ending on 12 November.

Whatever the outcome of any decision, Mr Ahmad would be able to appeal at sport's highest legal power, the Court of Arbitration for Sport.