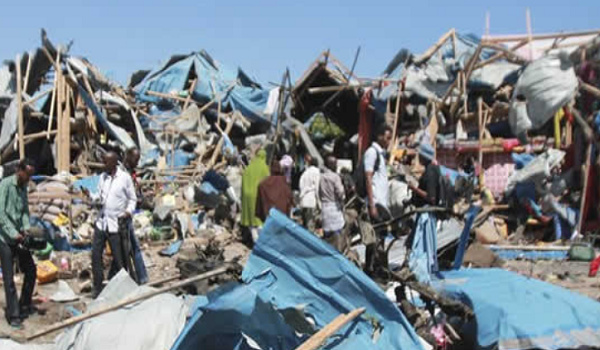 At least seven people were killed when a car bomb exploded at an army base in the Somali capital Mogadishu on Saturday, August 8, 2020, military and emergency services officials said.

The attack targeted a compound near Somalia’s national stadium where soldiers from the Somali National Army are stationed.

“There was a heavy blast at the 27th brigade camp. A vehicle loaded with explosives rammed the entrance and there are casualties. Seven people died and more than ten others were wounded,” Mohamed Abdirahman, a lieutenant in the SNA, told AFP.

Aamin Ambulance, the country’s only free ambulance service, said in a statement that eight people died and 14 others were wounded in the blast.

Witnesses said the vehicle passed by a checkpoint before a huge explosion erupted near the military camp.

There was no immediate claim of responsibility.

Suleyman Hassan, a witness, said a minivan loaded with explosives detonated just outside the entrance.

“There are casualties, and some vehicles are burning. We can see clouds of smoke,” he said.

Other witnesses also reported seeing ambulances taking away the dead and wounded from the site.

Somalia has suffered near-continuous conflict for almost 30 years, while the internationally-backed government in Mogadishu has been fighting Al-Shabaab Islamic insurgents since 2008.

Bombings and other terrorist attacks are common in Mogadishu, although few have been recorded in recent months.