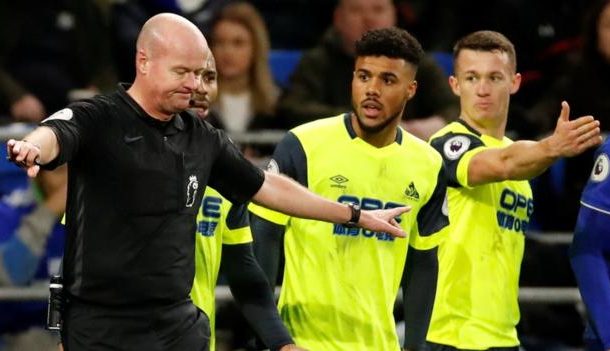 The Premier League's bottom side Huddersfield Town were controversially denied a late penalty as they ground their way to an attritional goalless draw away against relegation rivals Cardiff City.
A meeting between two of the division's three lowest-scoring teams was never likely to set pulses racing, and it lived up to its modest billing during a turgid first half.
The best either side could muster was the occasional set-piece hoisted hopefully into the penalty area, and their combined total of one shot on target between them in the entire match told its own story.

With 14 minutes left, Huddersfield thought they had a golden opportunity to snatch what would only have been their third win of the season when referee Lee Mason awarded them a penalty after Cardiff's Joe Bennett brought down Florent Hadergjonaj.
But assistant referee Stuart Burt intervened to tell Mason that it was in fact Hadergjonaj who had fouled Bennett, and Mason reversed his decision, prompting a furious reaction from the Huddersfield dugout.
The result means the Terriers stay at the foot of the Premier League, eight points adrift of safety, while Cardiff remain 17th in the table, one point in front of 18th-placed Newcastle, who visit Chelsea later on Saturday.

Huddersfield denied rare win
Nine successive defeats in all competitions had cut Huddersfield adrift at the bottom of the Premier League, eight points behind Cardiff in the first position of safety.
Chief among the reasons for their slump was an alarming lack of goals. Their total of 13 was the lowest in the division, with only five of those coming from open play.
Despite their struggles, however, there was no suggestion that manager David Wagner's position was under threat.
Although his job was safe, Wagner recognised the importance of this match and described it beforehand as "a game we have to win and it's a game which can affect our season massively".
Like Cardiff, there was no shortage of endeavour from the Terriers but their dismal recent form had left them almost entirely devoid of confidence in attack.
They did at least improve as the match wore on, enjoying long spells of possession and putting their opponents under pressure during the second half.
Then, with 76 minutes gone, Huddersfield were given a precious opportunity to score a rare goal and secure an even rarer win when they awarded a penalty.
But Mason's decision to reverse that call was a brutal body blow for the visitors.
Although this draw stopped the rot of eight successive league losses, this point will do little to allay the fears that Huddersfield are destined for the drop.
Cardiff frustration - and relief
Much like Huddersfield last season, at the start of this campaign Cardiff had been tipped by many for an instant and ignominious return to the Championship following their improbable promotion.
But also like the Terriers' first term back in the top flight, Neil Warnock's side had confounded their doubters to give themselves a fighting chance of surviving.
Their home form had been crucial to those hopes, with four of their five victories coming at Cardiff City Stadium, often full and intimidatingly loud.
There was another lively atmosphere on this occasion, albeit fuelled by the two sets of players' commitment and passion rather than any quality.
Scoring opportunities were at a premium for both sides, though Cardiff felt they should have had two penalties in the first half - one for handball from Erik Durm and another when Hadergjonaj brought down Junior Hoilett as the Bluebirds winger bore down on goal.
However, the disappointment of missing out on those spot-kicks paled into insignificance compared to the reprieve Cardiff got when Mason reversed his decision to award Huddersfield a late penalty.
A goalless draw against the league's bottom side may feel like a wasted opportunity for Warnock and his players but, given their late let-off, their sense of frustration may be tempered by one of relief.
Man of the match - Sol Bamba (Cardiff)
In a game in which neither attack fired, Bamba was imperious at the heart of Cardiff's defence, dominant in the air and assertive on the ball.
'We didn't deserve to win' - what they said
Cardiff captain Sean Morrison: "We wanted to take three points but with our performance we didn't deserve to win the game and we're disappointed. Huddersfield played with a lot less pressure, it was an all-or-nothing performance from them.
"We've got better players than we have shown today and if we want to stay in the Premier League our performances need to be better and we need to create chances." On the penalty Huddersfield were awarded before referee Lee Mason changed his mind: "From my point of view it was not a penalty. It was two or three yards before he went down. The referee gave it, spoke to a linesman and overturned."
More to follow.