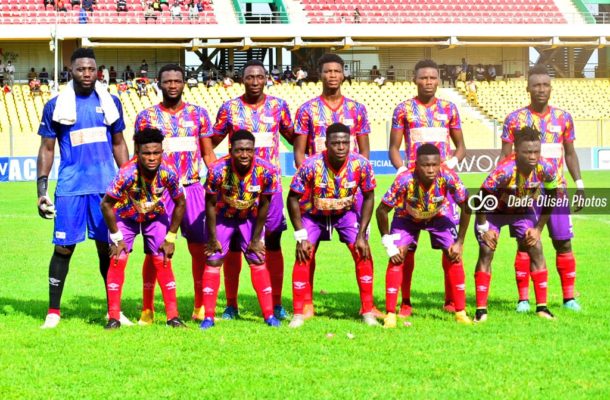 Champions Accra Hearts of Oak will be at home against Eleven Wonders on Match Day 13 of the Ghana Premier League on Sunday. The Phobians are in 7th place with 17 points after 12 matches and are in dire need of a win to catch up with rivals Asante Kotoko who lead the log with 26 points.

Hearts of Oak are reeling under loads to pressure to apiece their teaming fans following a topsy-turvy campaign that has allowed rivals Asante Kotoko to open a nine point gap at the top of the table.

Coach Samuel Boadu aims to recover from their 1-0 loss to Medeama SC in their outstanding match on Wednesday as they conceded a late penalty to throw away a possible one point at a very difficult ground – with Vincent Atinga’s 83rd minute goal dashing their hopes in the dying embers of the game.

With Emmanuel Nettey and Raddy Ovouka gone, the Coach has a daunting task to find the right balance for the rest of the season. Their last home match against Bechem United ended goalless – a result that compounded their problems and pushed them further down the ladder.

Hearts of Oak will also be without Kojo Obeng Junior following his red card on Wednesday. The Phobians have drawn three and won two of their last five home games – with the one against rivals Asante Kotoko still outstanding.

Eleven Wonders are 15th in the table with 12 points – 5 points adrift of the Champions and come into this game as undergoes judging from their underwhelming performance in the League. The Techiman based side have picked only one draw in six away matches and lost the other five.

This fixture will be played at the Accra Sports stadium on Sunday, January 16, 2022 and live on StarTimes Adepa channel 247.

In Other matches: Accra Great Olympics will put the weekend’s disappointment behind as they travel to Tarkwa to face Medeama SC at the Akoon Park. The home side are buzzing with confidence after dispatching Hearts of Ok 1-0 on Wednesday. Two time Champions Aduana FC welcome Accra Lions to the Nana Agyemang Badu Park at Dormaa while WAFA battles Dreams FC at the WAFA Park at Sogakope.

Fresh from their disappointing outing against Asante Kotoko, AshantiGold will fight to return to winning ways when they lock horns with strugglers Elmina Sharks at the Len Clay stadium.

Real Tamale United will clash with Bibiani Gold Stars at the Aliu Mahama stadium in the battle new entrants.

Finally on Monday, Legon Cities will match up against Bechem United at the Accra Sports stadium