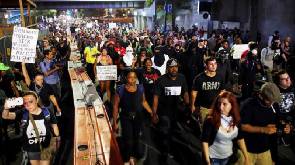 A third night of protests has rocked the city of Charlotte, North Carolina, after a black man was shot dead by a black police officer on Tuesday.

Thursday's protest was largely peaceful after violence a day earlier during which one person was fatally shot.

Excessive police force used against black men has been the subject of protests for two years across the US.

On Tuesday, Mr Scott was killed in Charlotte after police say he refused to drop a gun he was carrying. His family say he was unarmed and holding a book.

Police have released a video of the shooting to the family, but have refused to make it public.

The family's lawyer, Justin Bamberg, said no gun was visible in the video and Mr Scott appeared to be "acting calm".

"You do see something in his hand, but it's impossible to make out from the video what it is."

Police chief Kerr Putney said the video proved the shooting was justified, telling Fox news: "The officer perceived his failure to comply with commands, failure to drop the weapon and facing the officers as an imminent threat."

On Thursday, demonstrators protesting against Mr Scott's death defied a curfew put into force by the city's mayor on Thursday - running from midnight to 06:00.

According to Cpt Mike Campagna, officers did not enforce the curfew as protests were largely peaceful, with some on the street singing gospel songs.

Hundreds of National Guard troops were deployed on the streets to protect the city against further violence and property damage.

It followed Wednesday's protest during which protesters smashed windows of hotels and restaurants, set fires, and attacked reporters.

On Thursday, officer Betty Shelby was charged with manslaughter for shooting an unarmed man.

Prosecutors said her decision to shoot Terence Crutcher was "unreasonable".

Video of the incident shows Mr Crutcher with his hands up, leaning against the car.

Officer Shelby said Mr Crutcher had not followed her commands and she had opened fire when he began to reach into his car window.

As well as being shot, Mr Crutcher was also struck with a stun gun by another officer.

Ms Shelby's lawyer, Scott Wood, has said she believed Mr Crutcher was under the influence of the synthetic drug PCP. A vial of the drug was found in the car.

His family have disputed Ms Shelby's claim, arguing that his window was closed at the time of the incident.

Police have said no gun was found on Mr Crutcher or inside his vehicle.

The US justice department has also opened a separate investigation to see if Mr Crutcher's civil rights were violated.

If convicted, Ms Shelby faces a minimum of four years in prison.

After the charge, a small group of demonstrators gathered to demand a harsher sentence.

Just four days before the first presidential debate, Republican Donald Trump said the violence from the Charlotte protests was largely due to drugs.

"If you're not aware, drugs are a very, very big factor in what you're watching on television at night," he said.

Democratic vice-presidential candidate Tim Kaine said the list of black men fatally shot by police had "grown too long" and the country needed to confront the issue of racial tensions.

Republican Congressman Robert Pittenger, of North Carolina, told the BBC the protesters hated white people because white people were successful, but he later apologised for his comments in an interview with CNN.