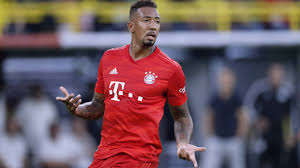 Bayern Munich are ready to cut their loses on former German defender Jerome Boateng as he is deemed surplus to requirements.

The Bavarians have Niklas Sule, Lucas Hernandez,Benjamin Pavard and Javi Martinez to play in the heart of defence.

Jerome Boateng is at war with his club Bayern Munich about a recent fine that was imposed on him by his club after getting involved in a motor accident.

The defender traveled to a town near Leipzig to visit his ailing son who lives with her mother without permission from the club.

According to the "Mirror", two premier legue clubs are in the hunt for the signature of Jérôme Boateng .

Accordingly, both Chelsea and Arsenal  should show interest in the 31-year-old. As reported by "Sport Bild", both clubs have already contacted the central defender.

The Munich team won't let him go that easily: Boateng is under Bayern coach Hansi Flick and has good prospects for the German record champions. The defender's contract expires in the summer of 2021.