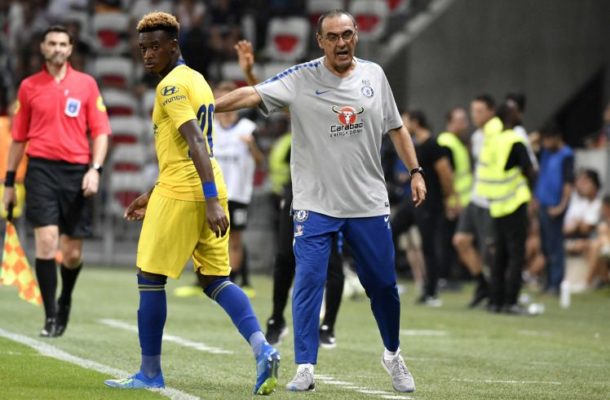 CHELSEA boss Maurizio Sarri has fallen victim to the wrath of Blues fans after he left Callum Hudson-Odoi out of squad AGAIN for Sunday's clash against Manchester City.
The teenager was stopped from leaving Stamford Bridge in January despite Bayern Munich's persisting efforts to sign him.

Bayern came up with several bids for Hudson-Odoi in January, but the Blues were adamant in keeping their young star and refused to sell him.

The 18-year old even handed in a transfer request to force the move through, only to have it rejected by the club's top brass.

Sarri even told Hudson-Odoi he owed Chelsea for rejecting his request, and maintained he saw his future at Stamford Bridge.


But the starlet has played just 74 minutes in the Premier League this season, and was snubbed again for Sunday's humiliating 6-0 defeat to City, infuriating Chelsea fans.

One wrote on Twitter: "When he leaves it’s on Sarri no-one else, the fact he’s included him in one out of the three games since the transfer window shut is outrageous.

"Sarri really has no faith in youth at all, as Napoli fans warned us."

While another added: "If you know me, you know I really like Sarri. But him saying Hudson-Odoi was ready for the big games, is so far the biggest lie told in 2019. Purely said because of Bayern’s interest."

A third wrote: "I hope Hudson Odoi leaves for his own good. Chelsea really could’ve used him as an impactful sub today if it wasn’t for Sarri’s stubbornness"

And fourth added: "Funny how as soon as the window closes Hudson-Odoi is nowhere to be seen."

Sarri appears to be playing with fire as Bayern will reportedly renew their pursuit of Hudson-Odoi in the summer - but Chelsea can now expect their offer to be much lower offer than the £45m the German giants bid last month.