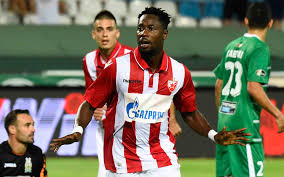 Chelsea manager Antonio Conte has identified the Ghanaian international as a possible replacement for out-of-favor striker, Michy Batsuayi who could be on his way out of Stamford bridge this transfer window.

Crystal Palace talisman Christian Benteke is also a possible candidate to replace Michy but reports suggest Conte prefers Yiadom who he has worked with briefly at Juventus three years ago.

Red-hot Yiadom completed 2017 with 42 goals to his name for the Serbian side.