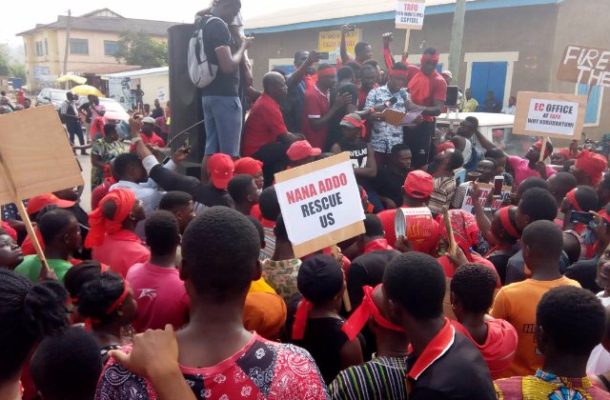 Hundreds of residents of Akyem Tafo in the Eastern Region have taken to the streets Wednesday to protest over the proposed capital for the yet-to-be-created Abuakwa North Municipal Assembly.

Led by traditional leaders, the Akyem Tafo Youth Movement (ATYM) asked the government to make Tafo the capital of the new district instead of Kukurantumi.

They maintain that it will be proper to make Tafo the capital which is already the economic hub of the area.


They also said making Tafo the capital, will be a befitting honour in memory of late Abuakwa North Member of Parliament (MP) Joseph Boakye Danquah Adu, who was brutally murdered on February 9, 2016.

The government has laid before Parliament a Legislative Instrument for the creation of 38 new Metropolitan, Municipal and Districts to facilitate development across the country.

Abuakwa North Municipal Assembly is one of the municipal assemblies to be created but there are claims that the government has settled on Kukurantumi instead of Tafo which has the requisite facilities.

The Tafo youth petitioned the Office of the President kicking against plans to site the capital at Kukurantumi which lies on the other side of the main Koforidua-Bunso road.

But the government has settled on Kukurantumi, Myjoyonline has learnt.

A leading member of the Tafo Youth Movement, Kwabena Sarpong told JoyNews' Eastern Region correspondent Maxwell Kudekor that the group will push for Tafo to made the capital.

He explained most of the Small Scale and Medium Enterprises (SMEs) are located within Tafo which provides some informal jobs for the local people.

Speaking at the protest, Chief of Tafo, Osabarima Adusei Piasah, urged the youth to demand what rightfully belongs to them, claiming several attempts to use dialogue to solve the problem did not work.

“The population of New Tafo alone according to the 2010 population and housing census is 31,477 and that of Old Tafo is 6,037. The voters’ population of Old and New Tafo is 19,734 which exceeds all towns within the Abuakwa North Constituency,” the chief said.