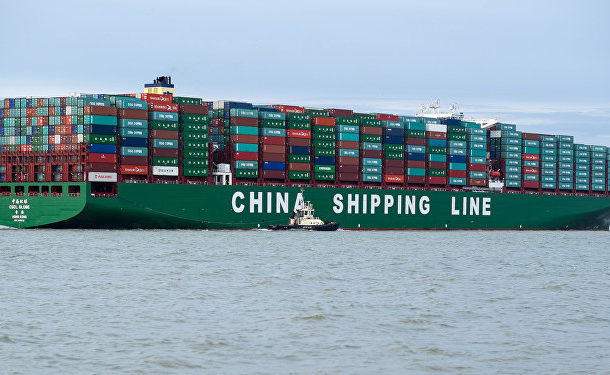 BEIJING (Sputnik) - Trade between China and Russia totalled a $68.6 billion in the first eight months of 2020, marking a 3.2 percent decrease year-on-year, the Chinese General Administration of Customs said on Monday.

According to the freshly-published data, Chinese exports to Russia from January to August decreased 0.8 percent compared to the same period last year, totalling $31 billion, while imports from Russia to China decreased 5.2 percent year-on-year to total $37.5 billion.
In August alone, China imported $4.5 billion worth of Russian goods and exported $5.2 billion worth of its own goods to Russia, the data shows.

©
AP Photo / Elizabeth Dalziel Caps made in China are sold at a local market in Beijing, China, Tuesday, March 31, 2009. Chinese exporters have seen global demands for their products plunge, leaving companies to dump goods in to a domestic market that is not as robust as foreign markets. The Chinese government has pushed forward a stimulus package that hopes to reduce the reliance on exports by increasing the domestic demand for goods. (AP Photo/ Elizabeth Dalziel)

China's trade with the United States also decreased in the January-August period, continuing the downward trend that has persisted since the two countries engaged in a brutal economic confrontation, which is often referred to as trade war.
In the given period, Chinese exports to the US decreased 3.6 percent year-on-year, totalling $266 billion, while US imports in China decreased 2.9 percent to a total of $78.2 billion.
The month of August accounted for $55.3 billion of bilateral trade, with China's exports to the US totalling $44.7 billion and US exports to China totalling $10.5 billion.