Chris Brown is still lusting after his ex, Karrueche

Chris Brown's ex girlfriend, Karrueche Tran who dumped him after she found out he had a love-child (Royalty) posted the photo above and captioned it 'Baby'.

Chris creeped into her comment section and wrote "Still want it".

The on and off relationship between Chris Brown and Karrueche Tran may be over for good but it appears that the R&B singer is still thinking about her even after his rumoured affair with Krista Santiago.

The singer reportedly sneaked his ex-girlfriend's Instagram page and couldn't resist leaving a cryptic comment on her sexy image.

The 27-year-old recording artist reportedly drooled over Tran's sexy post where she was posing seductively for the camera wearing a Sade T-shirt and red underwear and commented "Still want it," followed by the wide-eye, side-eye emoji. 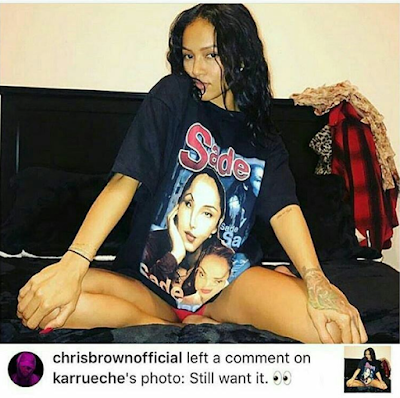 Though the comment is not visible now, The Shade Room has captured then screenshot leaving his fans wondering if the Royalty singer still wants his ex-girlfriend back.

The Loyal singer dated the American actress for a brief period but they split after he introduced his daughter Royalty to the world. It was rumoured that his daughter with Nia Guzman was born while he was still committed to Tran.