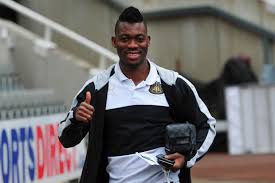 Christian Atsu is under no illusions about the challenge of winning a place back in Newcastle United’s first-team spot.

The 26 year old however remains optimistic of breaking into Rafa Benitez’s side despite his slow start to the season.

The Ghanaian winger is yet to feature after his unimpressive cameo in the opening day defeat to Tottenham.

But Atsu insists he is ready to battle for his place;

“I’m not frustrated because the league just started; we’ve played only two games. So I am keeping my focus and working hard at the training grounds” he said.

“I’m very happy we have competition in our team because it makes me work much harder but I believe the coach will give everybody chance” he emphasized.