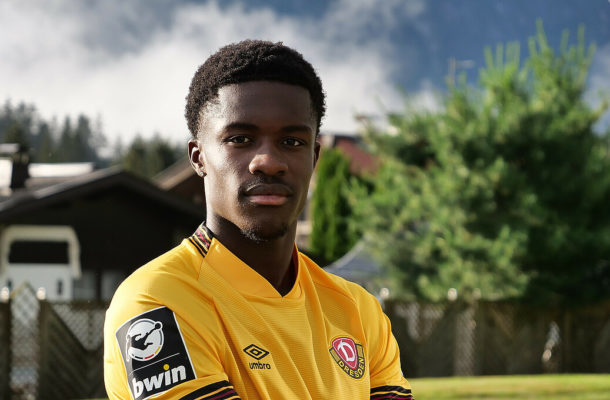 He joins the German club on a season long loan deal after a similar on at Dordrecht last season.

The 22-year-old goes to “Florence on the Elbe” on loan until June 30, 2023 from the Dutch first division club Feyenoord Rotterdam, where he still has a contract until 2024. Most recently, the 1.82 meter tall offensive player was loaned to the Dutch second division club FC Dordrecht – there he scored four goals and six assists in 16 games.

Conteh is delighted with his move and can't wait to get to know his teammates. He thinks he can be important to the team. "I would like to use my strength to help the team achieve the goals," Conteh said on the German club's website.

Conteh arrived at the black and yellow training camp in Bad Häring (Austria) on Friday evening and completed his first session with the SGD on Saturday morning.

He will wear shirt number 32 for black and yellow.

Ralf Becker , Managing Director Sport at SG Dynamo Dresden, says: "We are very satisfied that Christian Conteh decided to join SG Dynamo Dresden out of conviction. He's a classic winger - quick, brave in one-on-ones and capable of scoring goals. With his qualities he will enrich our offensive game. In addition, it is very positive that we found an immediate solution with all sides so that he could still join the team in the training camp.”

Christian Conteh , who successfully completed his sports medicine examination at the Carl Gustav Carus University Hospital in Dresden on Friday morning, says: “I really enjoy my time at SG Dynamo Dresden. So I'm all the more pleased to be able to get to know all my new team-mates directly in the training camp. I would like to use my strengths to help the team so that we can achieve our goals together. It's important that we have a total presence in the 3rd division from day one. In this respect, I am already looking forward to seeing the first home game in the Rudolf Harbig Stadium and feeling the impressive support from the fans.”

Christian Conteh, who also has Ghanaian citizenship, was born on August 27, 1999 in Hamburg. He first learned the football ABCs at TSV Wandsetal and Concordia Hamburg before moving to the youth academy at FC St. Pauli. With the North Germans he made the leap to professional football and appeared seven times in the 2nd Bundesliga (two goals, one assist).