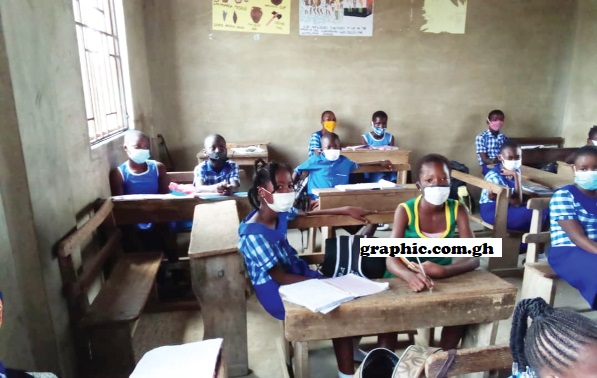 Classmates of the 10-year-old boy murdered at Kasoa in the Central Region on Holy Saturday say they are distraught over the gruesome manner in which their mate was killed.

The classmates, who eulogised Ishmael Mensah Abdallah for his calmness and generosity, said they were yet to come to terms with his sudden death.

They recalled being in his company last Thursday before the Easter break, saying that had sharply brought to them fond memories of him.

The Class Four mates of Master Abdallah were speaking in separate interviews with the Daily Graphic yesterday during a visit to their school, the Maranatha Preparatory and Junior High School at Millennium City, near Kasoa.

During the visit, it was observed that Ishmael's desk in his class was vacant, while all other desks were occupied.

One of the classmates, Master Richmond Mensah Amoh, said Ishmael was a kind person, always ready to help his friends.

"Any time you asked him for a textbook or something that he had, he gave it to you without hesitation,” he said.

Another classmate, Master Kwasi Kwarfo, indicated that Ishmael was so kind that he was willing to share whatever he had with his friends.

He said the class would surely miss him for the kindness he showed to everyone.

One of Ishmael’s close friends, Master Abdul Rahman, said he used to play with the deceased when they were in school, adding: "He was caring, friendly, calm and related well with everyone in the class."

The Class Four teacher, Mr Godlove Yeboah, said the children had lost some zeal going into the examination following the demise of their classmate.

"We are revising for examination next week, but as you can see, their spirit is down. We will surely miss Ishmael in the class. He was such an obedient child, always ready to lend a helping hand," he said.

The Proprietor of the school, Rev. John Richard Baffour-Awuah, said Ishmael had been in the school from the nursery stage and had been a regular pupil, saying he was heartbroken by the boy’s death.

"His death is devastating to the school and we are yet to overcome it," he said.

Rev. Baffour-Awuah said when school resumed after the Easter break, he had to go to Ishmael's class to encourage the children because they had all broken down when they received news of his death, adding: “Some were even scared, but I had to calm them down."

The Headmaster of the school, Mr Isaac Odae, said he could not believe it when news of Ishmael’s death broke because the boy had been seen “hale and hearty just last Thursday”.

Meanwhile, a fetish Priestess has been arrested at Amanase near Suhum in the Eastern Region by a team of police officers to assist with investigations into the ritual murder of Ishmael, reports Shirley Asiedu-Addo.

The Central Regional Police Public Relations Officer, Deputy Superintendent of Police Irene Oppong who confirmed the arrest, said the case's docket has been handed over to Criminal Investigations Department (CID) Headquarters of the Ghana Police Service.

Ishmael, 10, was murdered last Saturday, after Nicholas Kini, 18, and Felix Nyarko, 16, had allegedly lured him into an uncompleted building at Coca Cola, near Lamptey Mills, a suburb of Kasoa.

The two suspects were remanded into police custody by the Kasoa Circuit Court last Tuesday to reappear on April 20, 2021.

Meanwhile, family sources told the Daily Graphic that the police were expected to release Ishmael's body for Islamic rites and burial today.