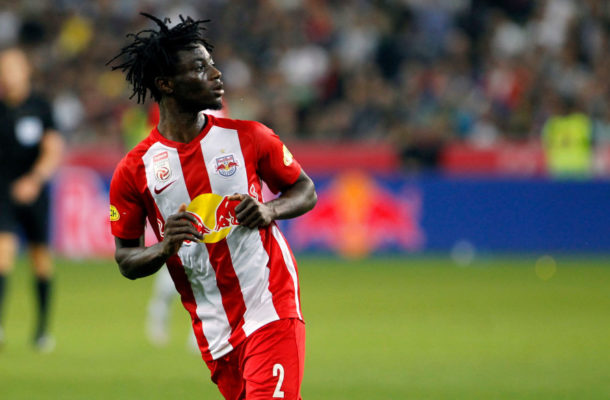 There is a tussle for the capture of Ghanaian left back Gideon Mensah as Club Brugge and Anderlecht battle for him.

Gideon Mensah was sent out on loan by his parent club Red Bull Salzburg to Zulte Waregem in Belgum this season.

There he made himself big with some eye catching performances for his on loan club which caught the attention of the big clubs in Belgium.

According Belgian outlet, voetbal24.be , both Club Brugge and RSC Anderlecht are very interested in snatching Mensah from Red Bull Salzburg.

Meanwhile  KRC Genk is also mentioned as a possible destination for the in demand full back.

According to reports,  the 21-year-old Ghanaian left-back  has an exit clause of six million euros.

The player who has been capped twice by his native country Ghana is still under contract in Salzburg until summer 2024.

Mensah moved from Ghana to join FC Liefering in summer 2016.

And was then farmed out on loan to SK Sturm, where he played 15 games, Mensah showed strong performances. Mensah did not play a game for Red Bull Salzburg.

Mensah made a total of 23 appearances for Zulte Waregem in the 2019/2020 season scoring three goals.