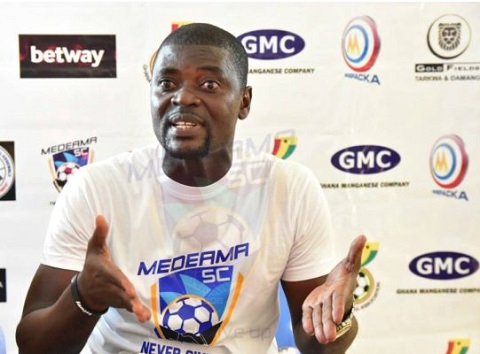 Head Coach of Medeama SC Samuel Boadu insists his team are on course to achieving their targets after their hard fought 1-0 victory against Asante Kotoko on Wednesday.

A last-minute penalty scored by Kwame Boateng handed the Mauve and Yellows all three points at the Tarkwa T & A park.

Speaking in his post match presser, the coach played down his side’s inability to score as freely as they did during pre season and stressed his aim is to achieve their set targets.

“That was in pre-season and that one was far different from this game. Nothing has changed but we are sorry, we’ve played three matches, we’ve won two and lost one. We are still on course”

“My concentration is on all the field so it will difficult to assess my players. The target for myself this season is to see to it that, at the end of the season, Medeama SC can transfer at least 10 players. Then I’ll know I’ve reached my target” he stated.