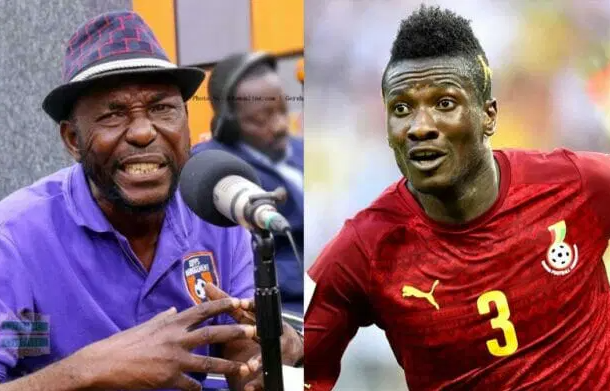 Veteran coach J.E Sarpong has accused his former protege Asamoah Gyan of breaking the promises made to him sometime back.

He says that the former Sunderland striker some time ago promised to buy him a new car after realizing that he was still using the same car when he was coaching him.

According to the gaffer, when Asamoah Gyan initially invited him he did not want to go but later changes his mind and attended the call.

He says the request to buy him a car was unsolicited and it was out of the player's free will but it has been years now but he has failed to keep the promise.

"I was then coaching Dwarfs and he called me to come to his place in Accra, initially, I didn't want to go but he insisted and I went there. We spoke and even shared some memories during our stay at Accra Academy," he told Ernest Brew Smith in an interview.

"He recognized that I was still using the same car I was using when I coached him."

"He promised to buy me a brand new car when he returns to China and even added that he will customize it in my name and pay all the duties on it," he revealed.

"It's been years and I don't know if I will get the car today or in ten years' time. I don't blame him entirely but the people around him," he insisted.]

Coach Sarpong saw the talents of Gyan and honed and nurtured his talents into a top asset for the nation.

Gyan has admitted on countless occasions the outstanding role coach Sarpong played in his career as a football, especially as a youngster.

He even honoured the veteran coach during the launch of his biography this year at the Kempinski Hotel in Accra.

Asamoah Gyan who is Ghana's all time scorer with 51 goals in 109 matches is without a club since leaving Legon Cities two seasons ago.