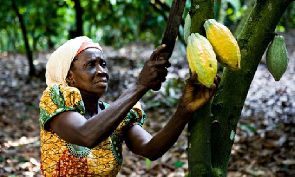 Some cocoa farmers in the Ashanti Region have expressed disappointment in government over what they describe as a ‘paltry’ increase in producer price of cocoa.

The Deputy Minister of Finance, Ato Forson Cassiel, announced an 11.76 percentage increase in the producer price for the 2016/2017 farming season, at the national celebration of the International Cocoa Day, at Tepa, in the Ahafo Ano North District of the Ashanti Region on Saturday.

The increase, which takes immediate effect, means farmers will receive about ¢475 for every 64kg bag of cocoa beans. But some cocoa farmers in Tepa, who were present at the event, told Citi News, the new prices did not meet their expectation.

According to them, they expected an increase from the current ¢425.00 per 64kg bag to an amount of over ¢500.00. They said the new price still meant their cost will outweigh their income.

The Deputy Minister however assured the farmers that government will continue the Stabilization Fund with annual contributions from the FoB price, as a risk mitigation mechanism against declines in international cocoa prices.

He said government will “continue with the fund so as to be able to cushion farmers, should the world market price begin to decline as we move into the future.” “Last year, the average FoB per tonne of cocoa sold was US$2,900, and this year the average FoB is $2,950 per tonne.