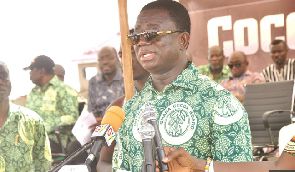 Cocobod has encouraged the youth to venture into cocoa growing to sustain the industry which has over the years kept the national economy going.

Dr. Stephen Kwabena Opuni, the Chief Executive Officer (CEO), said it was rewarding and rallied the young people to increasingly take to that.

He was speaking at this year’s International Cocoa Day celebration held in Tepa in the Ahafo­Ano North District.

“Transforming the cocoa sector for economic growth – The role of the youth” was the theme chosen for the event.

Dr. Opuni indicated that many of the nation’s farmers were ageing and that, it was important the youth took over from them to help increase the production levels.

The day is marked every year to appreciate the cocoa farmer and promote the consumption of cocoa products among the population.

The CEO of the Cocobod warned that the future of cocoa industry ­ the biggest contributor to the nation’s Gross Domestic Product (GDP), could be bleak if the youth were not motivated enough to embrace cocoa farming.

The average age of Ghana’s cocoa farmers is over 50 years with that of the cocoa farm about 30 years.

He identified the decline in soil fertility, climate change, illegal gold mining, cocoa crop diseases, specifically swollen shoot virus, and bad road network as some challenges that needed to be tackled to motive the youth into farming.

“In order for the youth to be confident in the sector, there is the need for the government and all stakeholders to find drastic measures to address these problems”, he added.

Dr. Opuni spoke of steps taken by the government to get young people into cocoa growing and mentioned the “Youth in Cocoa Farming Initiative”.
He said under that more than 40,000 young people were now into that economic activity.

He also mentioned the free supply of hybrid seedlings, fertilizer distribution and cocoa mass spraying as other interventions to make the crop production attractive.

Added to these, was the stepped up education by extension officers on good agronomic practices, early detection of cocoa diseases and identification of
diseased trees.