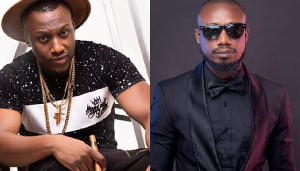 After resorting to verbal attacks and almost in fisticuffs with popular blogger Nkonkonsa over claims of failure to promote his new single, Coded of the 4X4 group, has finally apologized for his misconduct.

One can recall that Coded lost his cool and almost fought the popular blogger for not promoting his new Amanpiano song titled ‘dada damoase,’ during an interview with Neat FM.

“I’ll release a song, you can tell the song is good but you want me to play a different role, you want me to pay before you post it. When your colleagues are posting it. Why?

“Must it be a negative story before you post it? Why should I even pay you? For the negative shit, you said? The song was already blazing before I made those comments. It was already on air. You didn’t make the song a hit. Don’t F**ken tell me that. Are you okay? How can you make the song a hit? Are you f**ken kidding me? I don’t need your f**ken post. F**k you,” Angry Coded earlier fumed at Nkonkonsa who sat next to him in the studio.

But it appears that the former 4X4 member after a thorough retrospection has realized his mistakes.

Coded seized the opportunity during an interview with OkayFM’s Abeiku Santana to offer an apology to Nkonkonsa and his fans for employing inappropriate words during his rants.